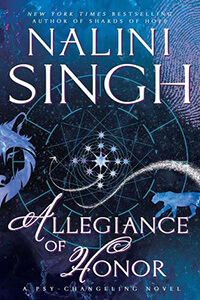 The Psy-Changeling world has undergone a staggering transformation and now stands at a crossroads. The Trinity Accord promises a new era of cooperation between disparate races and groups. It is a beacon of hope held together by many hands: Old enemies. New allies. Wary loners.

But a century of distrust and suspicion can’t be so easily forgotten and threatens to shatter Trinity from within at any moment. As rival members vie for dominance, chaos and evil gather in the shadows and a kidnapped woman’s cry for help washes up in San Francisco, while the Consortium turns its murderous gaze toward a child who is the embodiment of change, of love, of piercing hope: A child who is both Psy…and changeling.

To find the lost, protect the vulnerable—and save Trinity—no one can stand alone. This is a time of loyalty across divisions, of bonds woven into the heart and the soul, of heroes known and unknown standing back to back and holding the line. But is an allegiance of honor even possible with traitors lurking in their midst?

Allegiance of Honor is like a new starting point. Everyone is grouped differently from the first portion of the series. Silence has been broken and the races are mixing together in a group called the Trinity Accord. It is a very unstable group. Dark River, Snow Dancer and the Arrows are working very hard to keep this group in place and also the peace that comes with it. Ming decides he wants to be part of Trinity which leaves the founding members of the group struggling with ways to accept members.

There are a lot of subplots going on, some are lingering story lines, some are new. We have mixed race groups, Ming, issues with the PsyNet, focus on the child that is believed to be the start of the Psy’s downfall and the attacks on Black Sea. Everything all wrapped together in this book.

Basically, I felt like Allegiance of Honor was mostly set up for what’s to come. We revisit most of our couples from the previous books, check out their progress. We get to see the special gifts that will bring Snow Dancer and Dark River even closer together. The story lines don’t move forward much. The action and conflict we do have is very short lived, overshadowed by the placement of our characters. Kind of like chess, we are getting our pieces in place for the upcoming conflicts. There are parts I think we could have spent more time with and fleshed out a little more.

I believe we could call this a transitional book. A setup to prolong the series. I see things that we can focus on in future books for conflict, I’m just not sure of the couples we will be bringing together. The future is definitely going to be interesting.