Posted May 5, 2016 by Tanya in Paranormal Romance, Reviews / 6 Comments 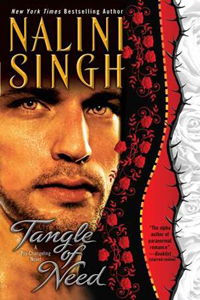 Adria, wolf changeling and resilient soldier, has made a break with the past—one as unpredictable in love as it was in war. Now comes a new territory, and a devastating new complication: Riaz, a SnowDancer lieutenant already sworn to a desperate woman who belongs to another.

For Riaz, the primal attraction he feels for Adria is a staggering betrayal. For Adria, his dangerous lone-wolf appeal is beyond sexual. It consumes her. It terrifies her. It threatens to undermine everything she has built of her new life. But fighting their wild compulsion toward one another proves a losing battle.

Their coming together is an inferno…and a melding of two wounded souls who promise each other no commitment, no ties, no bonds. Only pleasure. Too late, they realize that they have more to lose than they ever imagined. Drawn into a cataclysmic Psy war that may alter the fate of the world itself, they must make a decision that might just break them both.

I found a lot of the first portion of this book focused on past couples instead of Riaz and Adria. The storyline was moved along, and it was good to see these characters as they moved through their lives. I just felt that our focus wasn’t on the main couple.

Adria is a strong wolf, and suffered heartbreak before because of a previous partner not being able to handle her position. The relationship is over and now she’s built this new life. She doesn’t need anyone or anything messing it up. Needless to say, when Riaz comes along and makes her feel things, she is not happy. Besides, Riaz keeps blowing her off and playing games and she doesn’t need that.

Riaz has his head stuck in the clouds, believing he already found his mate, and he could not possibly “cheat” on that mate with Adria. Hell, he didn’t have a physical relationship with this other chick. He really irritated me with all that. Hawke took awhile with a bit of the same thing, but Riaz’s supposed mate is still alive. So Adria and Riaz try to work out an “arrangement”. Of course that is not going to last long. These wolves are just too possessive. They need good slaps upside the head to see what they are feeling, but eventually they get it.

This couple was not my favorite. I felt like most of the book was based on the upcoming war, the surprise characters and the parts certain groups play. The role that the Human Alliance is going to play still has me at odds. Hawke has his team with help from Dark River trying to keep an eye on potential threats. Especially that big threat that haunts Sienna. The territory they all live in is being threatened and both groups need to get their defenses ready.

I think between the motion of the combat storyline and the checking in with the other couples sort of took away a bit of Riaz and Adria’s relationship. Not to say there is not a good love story there. It could have been that this romance was kind of put in here to at least say it was romance when there was so much other stuff going on. I did enjoy Adria getting out with the girls. Seeing the girls actually be girls despite how rough and powerful they are is fun. You get to see a different side of them.

So, we get these little hints about Kaleb. He is searching for someone, or something. He seems to be totally obsessed with it. He’s involved in all the power struggle going on amid the other races, but he has this little crack that he is focused on. I can’t wait to get more on his story.

At this point, I’m frankly overwhelmed with the amount of novellas there are in this series. I’ve been listening to the series in audiobook, and haven’t thought to go back and grab the ebook novellas. One of these days I’m going to take the time to catch up with them all. Thank goodness they don’t seem to impact the story much.

Tangle of Need may not be my favorite of the series, but I still enjoyed it. The war and all the characters coming together is building and has me riveted.