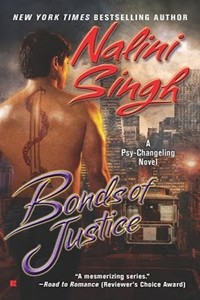 Max Shannon is a good cop, one of the best in New York Enforcement. Born with a natural shield that protects him against Psy mental invasions, he knows he has little chance of advancement within the Psy-dominated power structure. The last case he expects to be assigned is that of a murderer targeting a Psy Councilor’s closest advisors. And the last woman he expects to compel him in the most sensual of ways is a Psy on the verge of a catastrophic mental fracture…

Sophia Russo is a Justice-Psy, cursed with the ability to retrieve memories from men and women so twisted even veteran cops keep their distance. Appointed as Max’s liaison with the Psy, she finds herself fascinated by this human, her frozen heart threatening to thaw with forbidden emotion. But, her mind filled with other people’s nightmares, other people’s evil, she’s standing on the border between sanity and a silken darkness that urges her to take justice into her own hands, to become judge, jury…and executioner…

Bonds of Justice takes us a bit out of the normal playing field we’ve had with the previous books. Max is basically human with only a shield to protect him from Psy influence. He is one of the best in New York’s law enforcement. However, he is not related to the Human Alliance or any of the other groups we’ve enjoyed so far. He has had brief mentions in previous books, but not enough to get to know him.

Sophia has is a Justice-Psy who works closely with law enforcement. This is another side of the Psy that is new. J-Psy can get into the minds of criminals and retrieve the memories of their crimes. They help to put these criminals behind bars. This type of Psy gradually grows mad with the visions they have from all the awful things they see and need to be reconditioned regularly.

Sophia and Max meet when Sophia comes in to work one of Max’s cases. I found myself really enjoying the case they were working on. The guy was fascinated with Sophia which made her a target in his madness. Max tries to keep Sophia safe from both the perp and another reconditioning. It wasn’t hard for emotions to work their way through Sophia’s shields as it was coming close to reconditioning time for her and they were weak. Unfortunately, J-Psy’s can only take so much reconditioning before they break, and Sophia fears her time is up. She plans to enjoy all the time she has left with the man she has fallen for.

Max somehow gets a case in San Francisco protecting a Psy Councillor. This part of the story is where the Changelings and Nikita all come into play. I think we’re trying to weave everyone into connections for further down the road.

Max and Sophia were not my favorite couple. I enjoyed them, but I think I missed the intensity of the other races and their road to their HEA. Sophia’s conditioning was fragile if non-existent to start, and Max is human, which I felt like made for a pairing that was just not as intense as other couple’s. The circumstances the couple found themselves in were more interesting to me. I enjoyed the mysteries and games that were being played. I’m not exactly sure if this installment moves the story line along much, or was just added in to drop in more aspects of the other characters. I will be interested to see how Max & Sophia’s new roles are going to be utilized in the future.