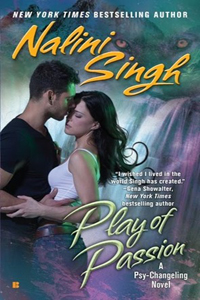 In his position as tracker for the SnowDancer pack, it's up to Drew Kincaid to rein in rogue changelings who have lost control of their animal halves- even if it means killing those who have gone too far. But nothing in his life has prepared him for the battle he must now wage to win the heart of a woman who makes his body ignite... and who threatens to enslave his wolf.

Lieutenant Indigo Riviere doesn't easily allow skin privileges, especially of the sensual kind- and the last person she expects to find herself craving is the most wickedly playful male in the den. Everything she knows tells her to pull back before the flames burn them both to ash... but she hasn't counted on Drew's will.

Now, two of SnowDancer's most stubborn wolves find themselves playing a hot, sexy game even as lethal danger stalks the very place they call home.

Three words: I Love Drew. His character is so laid back and playful. This is why he holds the special position he does within the Snow Dancer pack. He can be a mediator when needed and help soothe over conflicts. Now the test of his life is to get through to a stubborn female. Indigo has seen Drew as a playmate and friend forever. To take their relationship to the next step where Drew wants to go, completely freaks her out.

Indigo is very strong-willed. She has worked hard for her position and is a tough Lieutenant. Indigo is worried that Drew’s status in the pack makes him an underling who will eventually resent her for her dominance. She’s seen it happen with another family member.

Drew’s pursuit of Indigo made me smile. He’s definitely persistent and creative. He is just such an easy guy to like, he made the romance so sweet, despite his stubborn mate. There is a point that Indy pushes Drew too, that just made me want to scream in frustration and hurt. I don’t know how anyone could say no to a guy like Drew!

I’m still really excited on the build-up of conflict between the Psy, Changelings & Humans. There are alliances being formed and council members going off the wall. It’s going to be a whirlwind. Nalini Singh really does a great job of keeping me guessing on just where this is all leading. I’m sure it’s going to be great though!

Overall, I felt this was a sweet, romantic edition to the Psy-Changeling series. We mostly focus on the Snow Dancers, but that was ok with me, as I felt I hadn’t seen enough of them. This series continues to pull me in and keep me captivated. The narration was great and I had no complaints at all. I was pulled completely in by both the story and the narration. They make a great combination!