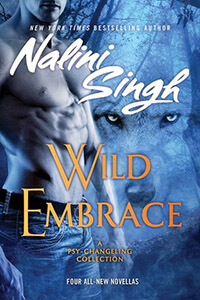 Echo of Silence
In a deep-sea station, Tazia Nerif has found her life’s work as an engineer, keeping things running smoothly. But she wants nothing more than to break down the barrier of silence between her and her telekinetic Psy station commander...

Dorian
A changeling who can never shift lives a life of quiet frustration—until he learns how to let his leopard come out and play...

Partners in Persuasion
Still raw from being burned by a dominant female, wolf changeling Felix will never again risk being a plaything. But for dominant leopard Dezi, he’s the most fascinating man she’s ever met. She just has to convince this gun-shy wolf that he can trust the dangerous cat who wants to take a slow, sexy bite out of him…

Flirtation of Fate
Seven years ago, Kenji broke Garnet’s heart. Now the wolf packmates have to investigate the shocking murder of one of their own. And the more Kenji sees of the woman Garnet has become, the deeper he begins to fall once more. But even his primal instincts are no match for the dark secret he carries...

Echo of Silence
It was really interesting to be taken out of the normal settings of the series and explore a different area. It was obvious from the start that Stephan had either broken Silence or was on his way to. His actions just had that layer of personality that is not a characteristic of the Psy. Including Tazia in his rescue plans to take her mind off of not having any family to go to during the time off was great. Giving in to his internal desire to get to know her better. Their story was a sweet one and confirmed for me that Stephan really had broken Silence. He cared about Tazia and wanted to fix the problems that were making her so sad. Tazia ended the story truly happy, even with how their relationship will have to continue when they go back to work. It was a really sweet story that focused more on family than either the Psy or Changeling worlds.
3.5

Dorian
I don’t really think this could be considered a novella. It was more of a sneak peak into the Pack’s reaction to Dorian’s new skill. His pack mates were able to show him how he could still use his human skills as well as his new skills as a cat. This was a lot of fun, and answered my question of how the Pack received the news of Dorian’s ability to change.
3.5

Partners in Persuasion
Felix’s submissiveness was kind of a turn off for me as a character at the beginning. I hadn’t really thought much of him as a character and for him to have his own story really didn’t interest me at first. Once he got past his initial issues with their hierarchy and they really started to come together and work on a relationship, I clicked in. It was great to see a male submissive accept and live in a situation with a female dominant. I also liked how the story took his nature and showed how useful he was in so many areas of a Changelings life, both in Snow Dancer and Dark River’s territories. Felix and Desiree found a way to make their lives, not only with the dominant/submissive thing but with the Cat/Wolf issues work and flow. It was a cute romance with a little help from Drew, which you know would include some crazy romantic things.
3.5

Flirtation of Fate
I think this was my favorite of all the stories here. I loved Garnet’s strong character. She had her own den and responsibilities and ran them flawlessly. That is until there is a murder. Just as there is supposed to be a meeting of lieutenants and Kenji ends up in her den. The two have history and not only will they be solving a murder, but they will be dealing with their past as well. The mystery was really interesting and I enjoyed how it played out. The relationship issue was kind of disappointing. His reasoning for torturing them for so many years seemed kind of anti-climatic. He wasted so many years on something that could have been solved with a simple sentence. It left me feeling kind of let down by Kenji, and he was one of my favorite characters with his flirting etc. until this. I really think this was the best story of them all.
4