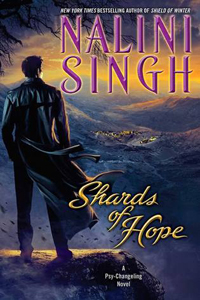 Awakening wounded in a darkened cell, their psychic abilities blocked, Aden and Zaira know they must escape. But when the lethal soldiers break free from their mysterious prison, they find themselves in a harsh, inhospitable landscape far from civilization. Their only hope for survival is to make it to the hidden home of a predatory changeling pack that doesn’t welcome outsiders.

And they must survive. A shadowy enemy has put a target on the back of the Arrow squad, an enemy that cannot be permitted to succeed in its deadly campaign. Aden will cross any line to keep his people safe for this new future, where even an assassin might have hope of a life beyond blood and death and pain. Zaira has no such hope. She knows she’s too damaged to return from the abyss. Her driving goal is to protect Aden, protect the only person who has ever come back for her no matter what.

This time, even Aden’s passionate determination may not be enough—because the emotionless chill of Silence existed for a reason. For the violent, and the insane, and the irreparably broken…like Zaira.

Aden has been a character we’ve only seen on and off. Even before silence broke, I don’t think he was completely conditioned. Zaira has a horrific past and is hanging onto her silence to keep the box she’s holding her feelings in together.

I loved the beginning. We start out right in the middle of the action and the race to save themselves was thrilling. We are introduced to another cat pack. That cat pack has ties to Lucas, but because of weather can’t report the two Arrows he has found. This gives Aden & Kaira some time to explore the new feelings that are coming out between them.

Shards of Hope introduces a new foe, and I’m really intrigued but just who it could be this time. They also don’t seem to be focusing on an individual group. They seem to be attacking humans, Psy and Changelings all alike. It’s all very curious.

I’m not sure I’m agreeing with the way the Arrow squad is evolving. I like that the silence protocol is no longer in place. I also like that the younger generation will not have to suffer as the present squad. But I’m worried about the impression the Arrows will have. Until now they have been this mysterious group of killers, and now they are out to the world and turning into something that seems very calm. I hope that they don’t lose the respect they have always had with the Psy.

The romance in Shards of Hope was sweet. Aden was very persistent, yet patient. This helped to assure Zaira she was not going to turn into a monster when she let herself relax. The new compound they are building and the exposure to all the children definitely helps Zaira as well.