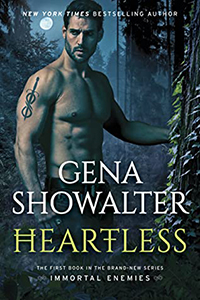 Kaysar the Unhinged One possesses a power like no other. A mystical song able to scramble any mind. Feared by one and all, the ruthless warrior earned his crown with blood, driven by a single purpose: the misery of every Frostline. Held captive by the royals as a child, Kaysar will stop at nothing to achieve victory—even abduct and seduce Prince Jareth’s beloved bride, winning her body and soul, ensuring his own child one day sits on his enemy’s throne. Except, the princess escapes to the mortal realm… where she dies, her heart transplanted into another.

Professional gamer girl Chantel “Cookie” Bardot is straight up weird. Great at trash talking, bad at peopling. Born with a defective heart, her lifeline to adventure is virtual via her avatar, an avenging temptress who enjoys her kills a little too much. After a long awaited heart transplant, she begins to develop strange abilities. Even her physical appearance changes…because she’s morphing into a powerful fairy princess! Soon, she’s catapulted into a strange and lethal world filled with fantastical and deadly creatures, ruled by the most seductive male in history. A dangerous enforcer determined to lure her into bed. But, the deeper they delve into their real life villain quest, the more Kaysar descends into madness. Should she run…or follow him?

Gena Showalter brings us a whole new world! Where the magical realm is full of different creatures and abilities.

After being tortured all through his childhood, Kaysar is free and out to take down every kingdom. He has this wild plan to get back at the court that held him prisoner but things don’t quite work out. Kaysar is pretty much completely lost to his craziness. He is violent and no one will deal with him for fear of him killing them all. I wasn’t really sure whether I liked his character or not through most of the book.

The world is really dark and violent. Surprising me as I wasn’t expecting something this dark from Gena. However, the way these characters are introduced and you got to know them, you are completely won over.

Cookie was the amusing character I am used to getting from Gena, but by the end, wow. She surprised me! I had a hard time seeing these two characters together, but their wackiness created a hilarious relationship. The feelings that come from Kaysar are so foreign to him and I kind of felt bad that he was a bit lost in the whole romantic world.

Heartless was a lot different that what I expected from Gena, but I totally loved it. It is dark, violent, but with an element of laughable moments that we normally see from her books. I definitely approve of this new series.