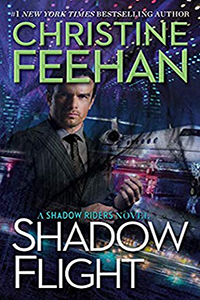 Nicoletta Gomez was a terrified teenager when Taviano Ferraro and his brother saved her life. Ever since, she’s been trying to rise above what was done to her, molding herself into a survivor under the protective eyes of the Ferraro family. All the while, she’s been falling hopelessly in love with the man who knows her darkest secrets.…

With one look, Taviano knew that Nicoletta was his, just as he felt their shadows connect. But no matter how much he wanted to claim her, he knew she needed time to become her own woman. When Nicoletta once again finds herself in the sights of dangerous men, a split-second decision has Taviano breaking all of the Ferraro family’s rules to keep her safe. And as far as he’s concerned, the reward is more than worth the risk.

I have been waiting for Nicoletta and Taviano’s story. Taviano has known for some time that his shadow had tangled with Nicoletta’s. He tortured them both as he was respectable and waited for her to become of age. I just knew her past was going to catch up to her though. Her life had changed so drastically when the Ferraros saved her, there was no way she was going to get trapped by the same people she was meant to be sold to so long ago.

Even though Nicoletta and Taviano as a couple was pretty much established from the start, Taviano had to do a lot to earn Nicoletta’s trust. She went through a lot before she was whisked away and she needs to work through it.

A lot comes to light in Shadow Flight, not only do we have some surprises about Nicoletta but there is some disturbing news regarding Shadow Riders and Taviano’s mother.

I’m getting engrossed in this series. The Riders have their special abilities and all that those skills involve, but the whole family dynamic just pulls you in. I’m eagerly awaiting the next installment of this series!