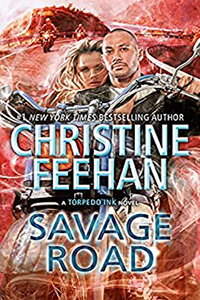 When Savin “Savage” Pajari and Seychelle Dubois first met, their connection was instant, their attraction undeniable. Their relationship has been full throttle since day one. Even though months have passed, the passion and love between them has only increased.

Savage completely owns what he is: a sadist in the bedroom who can only get off on his partner’s pain. He believes he’s not a good man, but he loves Seychelle with a fierceness that shocks him. He wants all of her, but only if she gives herself freely with eyes wide open.

Seychelle never imagined the lure of mixing pain with pleasure, or how much she’d crave Savage’s darkness. She’s been shaken to her core, but Seychelle is committed to Savage and their life together—even though he’s keeping a piece of himself back. And to truly make their relationship work, he has to give her everything that he is, just as she is doing for him.

Savage knows that what he really needs could break his woman if she isn’t ready. She agreed to come into his world, and he’s not about to give her up. He has to find a way to let her see the monster inside without pushing her away. But the real Savage might be more than Seychelle can bear...and he knows he wouldn’t survive losing her.

Ok, so I will admit, when I saw this book was coming out I did a happy dance. It was nice and close to Annihilation Road so I didn’t have to wait too long for the rest of Savage and Seychelle’s story. I was SO hyped after Annihilation Road that I jumped on Savage Road as soon as I could get my grubby little hands on it. Even now, I am giddy with joy over this book.

Savage and Seychelle’s story is a long one so is split into two books. Savage Road is the second part so PLEASE do not try to read this if you haven’t read Annihilation Road.

Oh, my heart. Savage wants to feel secure with Seychelle so bad, but he is terrified that if he lets her see every part of him, that she will leave. He is right on the edge with everything they do, worried he might go too far. If he does, he immediately assumes she is done with him and his mind goes to some really dark places. Savage is no angel. I will admit that. He does scare me. But my heart ached for him so many times throughout this book. Seychelle tries to reassure him that she is going to be there no matter what, but he just can’t seem to get it threw his head that she is serious. No matter what he throws at her, she will be there. However, there were times that I wasn’t sure I truly believed her either. I would be right on the edge of totally giving up on her being a good heroine. Oh and other club members coming down on Seychelle, doubting her compatibility with Savage was pretty rough. I did feel bad for her then, but on the other hand, in the back of my mind I was wondering if they were right!

Savage Road also brings more danger to the club, and even though she hates it, Seychelle allows her skills to be used. They need to know who is trying to kill them and why. She hates being “used” by the club when they are not telling her what is going on. The club tries to keep her involvement minimized but her skills get out and others play on her sympathies to tell them what they want to know. Even though it drains her. All these people draining her makes it even harder for her to keep up with Savage, which I thought should be like, priority number one.

Torpedo Ink is one of my favorite series. The paranormal is fairly light, which I’m ok with since the rest of the stories are so adrenaline filled. However, I would warn you that this series contains some hard stuff and may not be for those triggered easily. But I love it all and think everyone should read it!