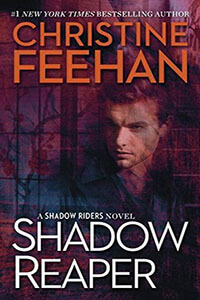 Billionaire playboy Ricco Ferraro knows no other life. Being a shadow rider is in his blood – but so is a haunting desperation stemming from the secrets of his dark past. His recklessness puts not only his life at risk, but also the future of his entire family. To save them all, he must find a woman who can meet his every desire with a heat all her own…

Just when Ricco has given up hope, he meets her – a mysterious woman whose shadow connects with his. She’s someone looking for a safe haven from the danger that has stalked her over the last several months. In Ricco’s embrace, she finds one. But the darkness in which they so often find sanctuary can also consume them…

The Shadow Riders series by Christine Feehan takes a very interesting twist on the paranormal with beings that can ride the shadows. It is definitely a different type of power and I’m anxious to learn more about it after reading Shadow Rider. The series features a family of shadow riders that are rich and famous. They reminded me, as well as the heroine in Shadow Rider, of mobsters. They have their part of the city and they take care of their own.

Ricco is the one that lives in the fast lane, literally as a race car driver, but in his personal life as well. I’m really excited to see how this party boy gets locked down. It appears we are going to get some action from the heroine’s side, where I’m sure the family will be getting involved saving her. I’d like to see more of the shadow riding and the problems that are fought with that in this book. I didn’t quite get enough of it in the first book!

Shadow Reaper releases May 30, 2017. Make sure to grab it. The series is just starting, so if you haven’t gotten on the Shadow Rider train yet, now is the time. Pick up Shadow Rider today and get Shadow Reaper on preorder! This new form of paranormal beings will fascinate you!