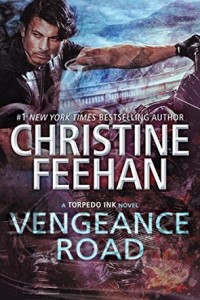 Breezy Simmons was born into a ruthless motorcycle club—and now that she’s out, she’s never going to be that girl again. But when her past catches up with her, Breezy must go to Sea Haven to seek out the man who almost destroyed her. The man who chose his club over her and left her feeling used and alone.

As vice president of Torpedo Ink, Steele is ride or die for the brothers he lived through hell with. He never thought he’d find something as pure as his feelings for Breezy, or that keeping her safe would mean driving her away with cruel words that turned her love for him to ash.

Now, Steele won’t let her walk away twice. He’ll do whatever it takes to make Breezy his woman again—especially when he learns the real reason she came to him for help, and that the stakes are higher than he ever could have imagined…

I was incredibly excited for Vengeance Road! Judgment Road was amazing and I was anxious to see how this special MC continued. These men are different. They all have special abilities, but they are not a predominant part of the story. Every one of them comes from a special school in Russia where they endured unbelievable, torturous conditions. They have been through a lot and Christine Feehan spares nothing as their pasts are described. I was shocked, I cried and my heart broke into tiny pieces.

Breezy grew up in a MC and experienced a lot of abuse. When she finally got away from it all, the last thing she wants is to be pulled into another MC. However, Torpedo Ink is not anything like the MC she grew up in. She needs help, and she’s come to the MC to get that help. There is a big connection to this club that drives her to find Torpedo Ink and ask for their help. Breezy is a strong person, even though she didn’t seem to be to me at first. But as she takes on Steele, and all of his problems, her personality comes out and you see just how perfect she is for Steele.

Steele and Breezy go through such an emotional ride and the threat they face is so personal. I was scared for them and was shocked by how Feehan didn’t hold back with the treatment of the characters. It pulled me into this world where I was terrified for everyone. Vengeance Road is dark, gritty and fascinating as you dive into a world of abuse, death and severe trauma. You are left with such an emotional connection to the Steele after all he’s endured and what he deals with on a day to day basis. I can’t get this couple out of my head after days of finishing the book.

Each of the characters has a shocking, terrible past and I’m left dying for the next book. I want each of these characters to find happiness after everything they’ve been through. Savage showed a lot of roughness in this book and I’m wondering how Feehan is going to get around his issues.

I don’t think I can properly explain the feelings that Vengeance Road provoked from me, but I can’t recommend this series enough. Just be prepared. It is raw and deals with some pretty terrible issues that are not for the faint of heart. I love Torpedo Ink and the next book can’t come fast enough for me!