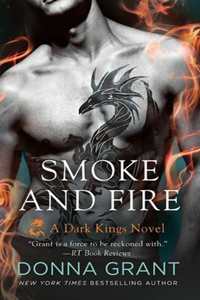 She wanted to touch him. There had always been something about being in his arms that made her feel as if she could tackle anything and the world wouldn't dare get in her way...

SWORN TO PROTECT
A dragon shapeshifter and a computer mastermind, Ryder is sent to guard Glasgow after a devastating Dark attack. But when memories of an explosive affair come back to him-in the flesh-Ryder cannot help but want to protect the woman who haunts his dreams. Even if means shifting into the dragon he was never supposed to reveal...

DRIVEN TO DESIRE
Kinsey could never get enough of Ryder. His every touch only left her wanting more. But now that she's seen him in his true form, Kinsey's world is rocked to the core. She knows that to stay-and feel-alive, she must be with Ryder. But is Kinsey's passion worth the risk of danger that comes with being a part of Ryder's dark and fierce world?

I was looking forward to Ryder’s story. You do not see him much in the books as he is always behind the scenes on his computers, so he intrigued me. I wasn’t sure how we were going to see him meet his mate. Maybe an online dating service? 😉

Since we have not seen a lot of Ryder, I wasn’t sure how to take his character. I knew he liked jelly donuts, and at times was witty. But I think he straddled the line between funny, relaxed side kick and serious computer geek. It doesn’t matter though, because I still felt an attraction to him. Probably the mystery.

I really liked Kinsey. She was determined and stubborn despite all the heart break she had suffered. She wanted to prove herself. Not only to Ryder, but to all the Kings, that she was not a spy for Ulrick. She tries very hard to keep her walls up around her heart. It was hard, even for me, to be mad at Ryder for what he did to her. He was just so stinking rational, romantic and patient with Kinsey, despite his inner turmoil.

Most of this book is spent inside the computer room and Ryder’s room at Draegan. We get glimpses of Rhi and her watcher and with Balladyn. There is some hinting of things happening with Balladyn that I found interesting. There are also some little surprises in the world of Merrick and Ulrick as well as Con & Usaeil. They are just little snippets here and there. Just enough to let you know there will be some big events coming up relating to all of them. There are some changes in Con that I’m really interested to see how they change the way he rules the Kings.

The climax of the story, relating to the war was heartbreaking and somewhat familiar. The plan and scheme that was to be played out was really tricky. I’m not sure if we’re going to learn more about how it was done. We know a couple of those involved, but the “how” may not get explained. There is also a new character introduced that I’m interested to see their place in the story.

Overall I felt Smoke and Fire was a little tamer than previous books. There were not a lot of big action scenes. Mostly I felt this book was based on a lot of emotion. There are glimpses into the progression of the war, but overall, it is mainly a story showing changes in characters. I think that these changes are going to play a part in where everyone is aligned at the moment of the big confrontation.