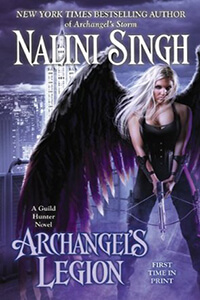 Angels are falling from the sky in New York, struck down by a vicious, unknown force.

Vampires are dying impossibly of disease.

Guild hunter Elena Deveraux and the Archangel Raphael must discover the source of the wave of death before it engulfs their city and their people, leaving New York a ruin and Raphael’s Tower under siege by enemy archangels.

Yet even as they fight desperately to save the city, an even darker force is stirring, its chill eyes trained on New York…and on Raphael. Rivers of crimson and nightmares given flesh, the world will never again be the same…

The Guild Hunter series now comes back to Elena and Raphael’s story.

New York is going all to hell. Vampires getting sick, strange environmental events. Is it the cascade or are they being targeted for attack? Strange things are even happening to Raphael. With all the madness going on, Elena once again worries that her humanity could be weakening Raphael. If he is weak, he may not be able to protect and keep himself safe. She couldn’t handle it if he left her.

The part we see with Elena and her dad kind of puzzled me. It didn’t seem to fit, but then if you look at it as giving her a reminder of what she needs with Raphael then it works. When I was reading it though, and when I first finished, I wondered what the point of that scene was.

So many things are going on in the city! It is so confusing as to whether these horrible things are happening because of an upcoming attack, something to do with the cascade or something else. All of the chaos keeps the story rolling at such a fast pace because you do not know what is coming up next.

Things start to build that give us a glimpse of just how bad this is going to be. Boy, does it get bad. This is so big you wonder who is going to survive and even if they do what kind of life they will have after this. It was exciting and had many moments where you were holding your breath.

Out of the shadows comes a new creature I guess you could call it. The question is if it is good or evil. The whole role these “creatures” play is going to be interesting in upcoming books. There are so many ways they can go.

I was left with a couple of questions, as I felt they were not related to what was going on in the overall arc. They could have been a build-up sent by the attacking archangel, but I can’t really see the point that these things made. Hopefully I will get answers in the next book, which I cannot wait to grab.

I also wanted to mention that Justine Eyre is doing a great job with the narration of all these characters that actually span the world. All the different accents are played well and do not detract from the story at all.