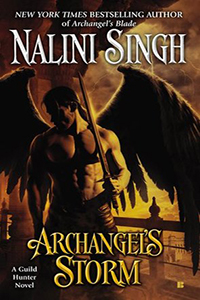 With wings of midnight and an affinity for shadows, Jason courts darkness. But now, with the Archangel Neha’s consort lying murdered in the jewel-studded palace that was his prison and her rage threatening cataclysmic devastation, Jason steps into the light, knowing he must unearth the murderer before it is too late.

Earning Neha’s trust comes at a price—Jason must tie himself to her bloodline through the Princess Mahiya, a woman with secrets so dangerous, she trusts no one. Least of all an enemy spymaster.

With only their relentless hunt for a violent, intelligent killer to unite them, Jason and Mahiya embark on a quest that leads to a centuries-old nightmare… and to the dark storm of an unexpected passion that threatens to drench them both in blood.

Jason has been the mysterious one of the Seven. With his black wings and great spymaster abilities, he definitely had me curious. When Neha requests he be the one to help with her murder case, you can be assured he must be the best of the best. He has to play his cards right though. It is a tricky political position he plays. Neha will be sneaky, and Jason doesn’t want to cross the line between her and Raphael.

Who would have known that the blood oath between Jason and Mahiya would bring them so close together. Jason thought he was coming for an in-and-out job. But his new little companion has him intrigued. These feelings and protectiveness he has toward Mahiya are new. He knows he has to save her from her life, but after awhile the line blurs on how he is going to get her out of her current life and into a position where he can be with her.

Mahiya was great. I loved that she comes across as this little, insignificant person, but deep down she’s a pistol. Secretly preparing for the fight of her life, she’s not as frail as some may think. Definitely helpful for Jason.

Their relationship is woven into the story in quick bits between the evidence and action of the mystery. I had a niggling in the back of my head of who might have been the responsible party, but wasn’t sure how it was going to work out. Neha was in for a big surprise. Nothing about this person was expected, and the revelation left some characters in unknown territory.

I really enjoyed watching Jason come out of his comfort zone and get to know Mahiya. Best of all was the final reveal and all the action that came with it. It was so exciting and gave me such an adrenaline rush. I loved this new character, even though I am not sure if she is supposed to be on the side of good or evil.

It will be interesting to see how Jason’s life works out with a mate and his regular duties. I can’t picture them spending a lot of time together. The archangels are evolving and Jason is really going to have to work his pants off to keep Raphael and Dmitri up to date.

Another great Guild Hunter installment. It was nice to focus on another of the Seven. My favorite part remains the ending battles, those are written so well, and I get so involved in them I think the world around me disappears.