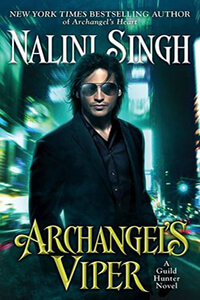 Once a broken girl known as Sorrow, Holly Chang now prowls the shadowy gray underground of the city for the angels. But it’s not her winged allies who make her a wanted woman—it’s the unknown power coursing through her veins. Brutalized by an insane archangel, she was left with the bloodlust of a vampire, the ability to mesmerize her prey, and a poisonous bite.

Now, someone has put a bounty on her head…

Venom is one of the Seven, Archangel Raphael’s private guard, and he’s as infuriating as he is seductive. A centuries-old vampire, his fangs dispense a poison deadlier than Holly’s. But even if Venom can protect Holly from those hunting her, he might not be able to save himself—because the strange, violent power inside Holly is awakening…

No one is safe.

Viper has been a mysterious member of Raphael’s Seven throughout the series for me. His appearances are few and you don’t learn a lot about him. Archangel’s Viper brings him out and shows us just who this snake-eyed viper is. He is lethal, but he possesses a sly, teasing side when it comes to Holly. I know he was one of the first “babysitters” she had after her initial turning, so they have a relationship where he loves to tease her and she loves to tell him where to shove it.

Holly does lots of complaining and cursing about this man who likes to push all her buttons, but there is a connection there. Even if it’s just that they are both “different” from regular vampires. Holly has grown a lot since that girl rejecting everything around her and calling herself “Sorrow”. She’s begun to take control of her life. Or so she seems to be, while she is also hiding a dark secret. Her character is sarcastic and fun, even when she’s trying to be a pain in the ass to Viper. She also has a vulnerable side. Holly berry has a lot going on inside that little body of hers.

Archangel’s Viper starts out with a mission of finding who has put a hit out on Holly. However, some of Holly’s secrets have begun to emerge and those become high priority to the Tower. We get to go on a trip to try and settle the thing growing inside of Holly. To find out what is behind it. I love these trips Nalini Singh takes us on where we are sneaking in and out of territories. We are always left on the edge of our seats wondering when that one little move is going to set off alarm bells.

What Holly and Viper find is just beyond what I could have imagined. I was totally surprised and then confused on how the story was going to play out. I was hooked, fascinated by the way the story developed. My imagination kept running ahead trying to figure out just how this was all going to work!

Archangel’s Viper was a fun and mysterious adventure into unknown territory. I loved the development of Viper and Holly’s relationship, how they slowly became each other’s one and only. I knew they felt deeply to be able to tease and grouch at each other the way they did, but when it developed deeper, Viper became a completely different person. His past comes to light and you see him so differently. His story is kind of what Holly needed to come to terms with herself.

I listened to the audio and as usual loved every minute of it. Justine Eyre does an amazing job at putting the emotion into the characters. The sarcasm and the pain. She brings it out in every moment and hooks you into the story.