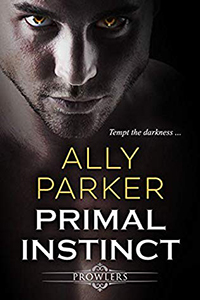 Freedom has been a pleasure denied to Mackenzie for the last five years. Forced to do the bidding of a crazed man to keep both her sister and her self alive, she is sent on a mission to infiltrate a group of people. Payment; their release. The only problem, no one mentioned they weren’t human. Or, that she would be drawn to a certain sexy, addictive male.

Which will she decide, her heart? Or her freedom?

In a world filled with despair, Jaxx’s only chance to save his humanity is tethered to a woman he hasn’t met. Finding her in an underground facility with his kidnapped protégé, was the last place he thought to find his savior. In a web of corruption, he will have to find the truth and convince his mate, she is his.

Before it’s too late.

Primal Instinct is book one in the Prowlers series by Ally Parker. We are introduced to a world of shifters and werewolves who are being experimented on. They also have their own internal politics they are dealing with. In this world, a shifter is marked by glyphs the longer he goes without meeting his mate. If they don’t get their mate before the glyphs close their cycle, they will go mad. Most shifters are killed when this happens. Jaxx is on borrowed time. He needs to find his mate soon, but the possibility of trouble from the council for changing a human, and missing weres has his head focused on other things. Until he meets Mackenzie. A human tangled up in the mystery of the missing weres.

Mackenzie has been trapped working for Delmac to try and keep her sister from harm. Just when she thinks she has fulfilled what is required of her and she can get her sister back, she finds a new player and that they lied about cutting her sister loose. Now she is following directions from Kali, and spying on a group of people.

It all falls apart when Mackenzie and the pack meet up at Delmac. The shifters have found this place where some of their weres are being experimented on, and Mackenzie is there trying to save her sister.

Primal Instinct was a great introduction to a new world. It had some good, exciting adventure mixed with a bit of an insta-love connection. I liked Mackenzie and her drive to save her sister, even after she discovers some of the things that have already happened to her. I thought Mackenzie would blame herself more, especially after how things end with their relationship.

I’m really interested in reading more of this series. It will definitely add to my TBR pile!