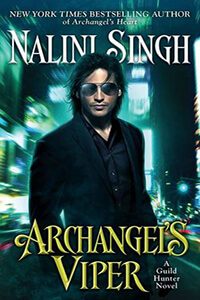 Once a broken girl known as Sorrow, Holly Chang now prowls the shadowy gray underground of the city for the angels. But it’s not her winged allies who make her a wanted woman—it’s the unknown power coursing through her veins. Brutalized by an insane archangel, she was left with the bloodlust of a vampire, the ability to mesmerize her prey, and a poisonous bite.

Now, someone has put a bounty on her head…

Venom is one of the Seven, Archangel Raphael’s private guard, and he’s as infuriating as he is seductive. A centuries-old vampire, his fangs dispense a poison deadlier than Holly’s. But even if Venom can protect Holly from those hunting her, he might not be able to save himself—because the strange, violent power inside Holly is awakening…

No one is safe.

Holly has been a big question mark for awhile, ever since she started exhibiting unknown powers, she’s kind of been in the background, watched by Viper and other angels as they try to figure out just what she is capable of. I am so curious to see just what Holly is going to blossom into. Especially when her and Venom come together. I think it’s going to be explosive. I am also anxious to see what Holly’s abilities are going to mean for the overall arc of the story, or maybe this story is not going to involve the storyline with Lijuan.

There is not much more of a wait for this one! September 26, 2017 is coming fast! I wish the audio was available for preorder. I’d like to get that out of the way to make sure I have it. I love this series in audio, it is so well done. Get your preorder in, so you’ll be ready for Holly and Viper on release day!