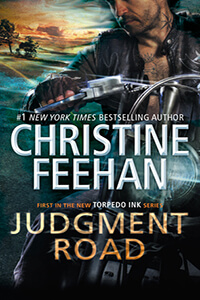 As the enforcer of the Torpedo Ink motorcycle club, Reaper lives for riding and fighting. He's a stone-cold killer who turns his wrath on those who deserve it. Feelings are a weakness he can't afford--until a gorgeous bartender gets under his skin...

Near Sea Haven, the small town of Caspar has given Anya Rafferty a new lease on life. And she's desperate to hold on to her job at the biker bar, even if the scariest member of the club seems to have it out for her. But Reaper's imposing presence and smoldering looks just ratchet up the heat.

Anya's touch is everything Reaper doesn't want--and it brands him to the bone. But when her secrets catch up to her, Reaper will have to choose between Anya and his club--his heart and his soul.

We met a lot of these characters in the final book of the Sea Haven series, Bound Together. They intrigued me then so I was especially excited to see that Christine Feehan was going to spin them off into their own series. I definitely wanted to know more about them!

The members of Torpedo Ink have been through the unimaginable and they don’t believe they could ever live normal lives. Czar and Blythe are trying to teach them how to live in society without the constant killing. However, Torpedo Ink still does runs to help the innocent.

Reaper is one of Torpedo Ink’s deadly enforcers and has BTDT. However, he cannot understand his reactions to the new bartender at the club’s bar. He wants her fired to try and stop his obsession, but truly he doesn’t think he can stay away even if she was to be fired. Reaper has serious issues. These make him dangerous and he believes unable to have a normal relationship. But he just can’t stay away from Anya.

Anya has secrets of her own. Like why she is living out of her car in the campground. She is a great bartender though and can’t understand why Reaper wants her fired. Then they start to have a relationship. They seem to be slowly finding their way with each other until Anya’s secret comes out and Reaper is left to choose between his club and his girl. That is just the tip of the iceberg for this couple’s problems.

I was on an emotional roller coaster this entire book. I’ve had a spot in my heart for the club members from the beginning and watching Reaper go through these things in life he’s never had before was heartbreaking. He’d make progress, then things would get torn apart. One step forward, two steps back. My heart ached for the both of them during some scenes and the tears, they were pooling.

I think we get the hint of who our next couple is going to be and it will be between two clubs. That is going to be interesting because you can’t leave Torpedo Ink. Of course, there are 18 survivors that form Torpedo Ink, so there are a lot of stories that could be told. I hope this is a long series. Especially if they are all like this one.

Christine Feehan doesn’t hold back on the action or the romance. The depraved characters the club go up against really turn your stomach and a lot of issues get addressed. Nothing is too much, and that just pulls you through all your emotions. Be prepared going in that you are not going to want to put this book down.