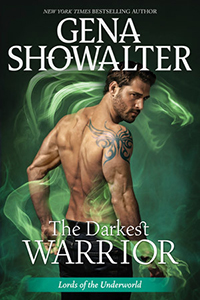 A searing Lords of the Underworld tale by New York Times bestselling author Gena Showalter, featuring a beastly prince and the wife he will wage war to keep.

Puck the Undefeated, host of the demon of Indifference, cannot experience emotion without punishment, so he allows himself to feel nothing. Until her. According to ancient prophecy, she is the key to avenging his past, saving his realm, and ruling as king. All he must do? Steal her from the man she loves—and marry her.

Gillian Shaw has suffered many tragedies in her too-short life, but nothing could have prepared the fragile human for her transition into immortality. To survive, she must wed a horned monster who both intrigues and frightens her...and become the warrior queen she was born to be.

As a rising sense of possession and obsession overtake Puck, so does insatiable lust. The more he learns about his clever, resourceful wife, the more he craves her. And the more time Gillian spends with her protective husband, the more she aches for him. But the prophecy also predicts an unhappily ever after. Can Puck defeat fate itself to keep the woman who brought his deadened heart back to life? Or will they succumb to destiny, losing each other…and everything they’ve been fighting for?

I am going back and trying to catch up on series that have gotten lost amongst all the review books and The Darkest Warrior by Gena Showalter was one of them. Admittedly, I did read Galen and Legion’s story before this one, but it didn’t affect this story at all.

I thought I was not going to like Puck. Mainly because I envisioned Gillian with William. However, learning Puck’s story made me really feel for him. He was very close with his brother and was determined to avoid the prophecy that would lead to one of their deaths. Puck did everything he could to avoid doing anything that could lead to them going down that path. But he never anticipated that he might be betrayed by the one he loved most.

Gillian is in trouble, and Puck is willing to step in to help her where William is not. Puck may have ulterior motives, but he starts fighting how he feels toward her almost immediately. I thought Gillian would be more resentful towards William but she focuses more on the deal she has made with Puck to feel emotions despite his demon.

I loved what Gena Showalter did with Gillian’s character. She changes drastically in this book and becomes the kind of female character I love in Gena’s books. We see a lot of change in our main characters throughout the whole book. The prophecies from the Oracles take on new meanings. I did feel sad for William. He was sure Gillian was his and he would find a way to break his curse. I was so conflicted with how I felt about William’s determination to have Gillian. There was always the possibility that things could end up very different and Gillian could end up with William.

The different possible directions the story could take, as well as my love for the characters kept me transfixed. At the beginning I was scared of how I would feel about Gillian not being with William, but I was left feeling very satisfied and happy with the ending we got. I’m glad I finally got to The Darkest Warrior. It was just as much fun as the other books in the Lords of the Underworld series. Now I’m all set for the next release!