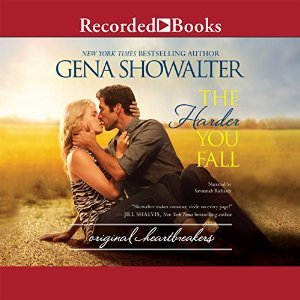 Millionaire video-game creator Lincoln West has a dark and tragic past. The sought-after bachelor lives by a rigid schedule and a single rule—one relationship per year, lasting no more than two months. No exceptions. He moved to small town Strawberry Valley, Oklahoma, with his brothers-by-circumstance hoping to escape the worst of his memories—until a brash beauty dredges up long-buried emotions.

A reformed party girl, Jessie Kay Dillon is determined to walk the straight and narrow. But her love-hate sizzle with West is just too irresistible. They can't be near each other without tearing off their clothes, but the last thing she needs is to be his next two-month dump. Can she be the one exception? Because as any former girl-gone-wild knows: rules are made to be broken.

Somehow I missed this installment when I was reading the series, and I’m not really sure how I did that considering Jessie Kay is one of my favorite characters of the series. I really should be doing some TBR challenge because I’m really going through all the books I’ve purchased but haven’t gotten to.

In The Harder You Fall, we have two characters who are totally ashamed of their pasts and each have restrictions that have imposed on themselves to try and make up for those pasts. The thing is, most of the things they are punishing themselves for have already long been forgiven by those they feel they have harmed. That made this story a bit frustrating. Especially with West. I felt like he was torturing himself for no reason. He struggles to get Jessie Kay to fall into his self-imposed restrictions but that just isn’t happening. Jessie Kay has decided that she is not longer that party girl that let herself get into what she hoped were relationships but that never turned out to be. She wants a relationship like her parents had and is determined that unless West gets rid of his restrictions, that relationship is just not going to be with him. Jessie Kay is stubborn and I love that. She really stuck it out with West as he struggled with the collision of his feelings for Jessie Kay and his rules.

There is some suspense with a crazy woman who is determined to have West and that Jessie Kay is in the way. It is kind of on the side but causes even more of a problem between the couple. It takes the wits of West and Jessie Kay’s friends to take care of the problem and I really loved how everyone was there and ready to stand up for them.

I also really loved Jessie Kay and Daniel’s friendship. It was so great that she was able to take something that could have been uncomfortable and made it into a relationship that was good for both of them. Jessie Kay needed a friend in this new life she was living and she got that with Daniel. They were there for each other and made great friends, despite West’s objections.

The communications and texts between Jessie Kay, West and others always made me laugh. Jessie Kay may claim to be electronically challenged, but she knows how to text and use those smiley face emojis. It was great fun and I loved every minute.

I was so glad to finally have Jessie Kay and West’s story. It was great to see all the characters from the first two books and get Harlow and Beck’s surprise. I listened to the audiobooks and Savannah Richards did a really good southern girl accent with Jessie Kay. It wasn’t overdone at all. It was an enjoyable listen and I’m glad I picked it up in this format.