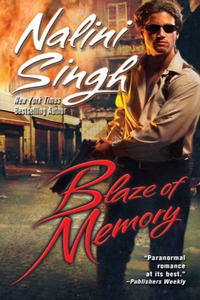 A woman without a past becomes the pawn of the man who controls her future...

Dev Santos discovers her unconscious and battered, with no memory of who she is. All she knows is that she's dangerous. Charged with protecting his people's most vulnerable secrets, Dev is duty-bound to eliminate all threats. It's a task he's never hesitated to complete...until he finds himself drawn to a woman who might prove to be the enemy's most insidious weapon yet.

Stripped of her memories by a shadowy oppressor and programmed to carry out cold-blooded murder, Katya Haas is fighting desperately for her sanity. Her only hope is Dev. But how can she expect to gain the trust of a man who could very well be her next target? For in this game, one must die...

I was kind of surprised on the next couple featured couple of this series. However, there are a lot of characters involved in this storyline so it does make sense to be giving them more air time.

Our heroine was kind of a surprise to me, as her existence was not expected. She is aware of her goal, but does not seem to struggle much throughout the book with it. I thought she would have a harder time resisting the urges in her head. However, her break with silence helps her to battle her directives.

Dev was an unknown. I was curious on where he stood in the previous book. Now his objective is known and a whole society of is discovered. The Forgotten are Dev’s first priority and he cannot allow anything to distract him. His team seems to recognize what is going on and do give him the space he needs to deal with this potential threat.

Katya knows her refusal to complete her mission is deadly to her, but she continues to fight it. This is it for me. The trials that the couple are put they are heart wrenching. Why does Singh keep doing this to me?! I am such a sucker for these couples. I was not even as attached to this couple as I have been with others, but I could still not stop the emotions. I would be a terrible Psy.

There is a big reveal at the end concerning some unexpected powers. It came as a big surprise to me and I wonder how they are going to be treated in upcoming books. How these powers will be nurtured.

In the end, I felt that Dev & Katya were not my favorite couple, nor was there story as engrossing as some of the others. I do love the indication that this world will be broadened, though. It opens up everything about the Forgotten and how they can be used in upcoming conflict. For this reason, I would not recommend skipping this one, or you will lost later on.

I give Blaze of Memory a 3.5. I just didn’t get the connection despite my complete breakdown near the end.