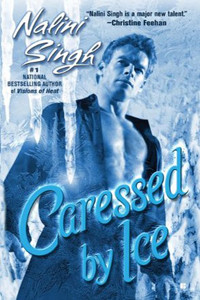 As an Arrow, an elite soldier in the Psy Council ranks, Judd Lauren was forced to do terrible things in the name of his people. Now he is a defector, and his dark abilities have made him the most deadly of assassins - cold, pitiless, unfeeling. Until he meets Brenna...

Brenna Shane Kincaid was an innocent before she was abducted - and had her mind violated - by a serial killer. Her sense of evil runs so deep, she fears she could become a killer herself. Then the first dead body is found, victim of a familiar madness. Judd is her only hope, yet her sensual changeling side rebels against the inhuman chill of his personality, even as desire explodes between them. Shocking and raw, their passion is a danger that threatens not only their hearts, but their very lives...

Caressed by Ice has another Psy – Changeling couple come together. This time roles are switched and it is a male Psy. Judd may have defected, but he is still Psy.

Judd has been living with the Snow Dancer clan for a long time, but his Psy roots are still in place. He was an Arrow before his defection and needs to use his skills to help fight a war that is brewing. He is undercover and dealing outside of the pack with Psy contacts. He is no longer an Arrow, but he is still a killer. His mind won’t let him focus on anything else.

Brenna has been seriously traumatized, and for some reason I could not fathom, she feels she could only turn to Judd for understanding. At first she doesn’t know all of his Psy powers, so is a bit scared when she finds out. Maybe she thinks that because he is Psy, she may get some insight into her tormentors head.

Their relationship starts with Brenna seeking help, but her wolf is soon warring with her human emotions on what she really feels for this hardened Psy. Brenna also causes Judd to fight his Silence. I felt like Judd’s fight was a lot harder. Fighting the violence inside him and the pain of going against Silence caused by his emotions for Brenna.

I just didn’t know how these two were going to make it work. Judd’s uncontrollable powers when he was aroused were really scary. Brenna had to balance out those little bits of emotion she could get out of him with how scary he got when they just got too close to having sex. Judd’s fear of his own capabilities was frustrating for him. Whenever they got close, I’m sure the whole pack knew it! It just seemed like Judd’s powers were going to make it impossible for the two to make it together.

Judd and Brenna seemed like an odd couple when you first look at them. But Brenna proves to be so much stronger than I originally thought. Good thing too, because now she has control of a pretty powerful Psy. I think it was good that Judd does not lose everything about himself. He is still pretty cold and violent, but Brenna has a side to him that is not for outside eyes.

I thought Caressed by Ice was really good. I loved Brenna, but I don’t really feel too much of a connection with Judd. I am fascinated with the secret meetings and the plots that are coming together for the Psy. I don’t know if this is some kind of rebellion of the Psy or a war coming with the Changelings, or what it could be. But I’m anxious to find out where it goes.