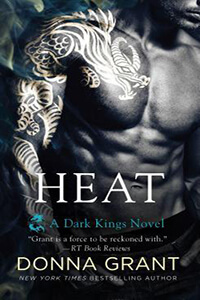 Nikolai is a dragon shapeshifter who knows well the meaning of loss. Orphaned and raised to be a Dragon King, he never accepts defeat. Now, Nikolai prefers his solitude . . .until a beautiful, irresistible woman calls upon him for help—and Nikola’s whole word goes up in flames.

Ever since MI5 agent Esther woke to discover her mind taken over with magic, she feels like stranger to herself. She looks to a notorious dragon, one who has the power to help her find her memory. But as she and Nikolai come closer to discovering what really happened to her, a dangerous passion ignites between them. Can this lone Dragon King help the woman he’s grown to love to uncover the truth about her past—or will a deep and fiery danger tear them both apart?

After eleven books in this series we’ve come to know a lot of the characters already. Nikolai may be newly awakened, but we are quickly introduced and you feel as if you know him and his feelings toward Esther right away. Esther has been in the storyline for a few books, but it is not until now that we see some glimmer of feelings towards someone. The attraction between them both is hinted at pretty early.

Esther hasn’t been the same since the Druid messed with her memories and she believes the only way she will get them back is to have Nikolai take her back to where she was when she lost them. She has some coasters from different places in the area she’s visited so they decide to use those as a kind of road map. Nikolai can see from her past when she was actually in those places and draw what he sees. What is interesting is they come across some information that may, or may not, change the Druid’s alliance.

We do learn more about the Druid, Eilish, and what she is actually after with Mikkel. Why she is working with him. After the strange events with Sebastian and Gianna, we wonder just how dedicated she really is to Mikkel. She is definitely keeping her options open as we see her more in Heat.

I thought the romance was pretty close to being already established at the beginning of the story. That just left the mystery of Esther’s memories and finding the Druid. We get some surprising visits from Ulrik, which continues to make me question my feelings on him and his plans. Not that I want to see him actually challenge Con, but I’m learning so much more about him, that I’m dying to read his book. To make it even more exciting, the ending to Heat really leaves you hanging. Kind of a cliffhanger, but more just hinting that we may have come to the point in the war we are all waiting for.

In disappointing news, we still don’t find out who Rhi’s King was, but we learn so much more about the Light Queen. She is incredibly more dangerous and conniving than we thought and her betrayals go a lot deeper than anyone could have imagined. Rhi’s relationship with Balladyn is kind of put in question over some of his actions. That kind of makes me happy because I’m really hoping that Rhi gets reunited with her King. I just love her character and want to see her happy. She’s been miserable for so long, and now when she learns even more details of their separation, I feel like a reunion may be possible!

In even more exciting news, we find out some pretty cool stuff about Esther and Henry. It takes Ryder some digging, but it will set them on a course looking for answers.

So much has happened in this series and we’ve been building up to a lot of things. We don’t get many answers in Heat, but a lot of new information is revealed. I was even left questioning Ulrik and wondering if his plans had changed any as he continues to make contact with the other Kings. This build up has me craving each new installment despite the challenge of keeping all the dragons with their powers and their mates straight. I may need a chart.

If you are a follower of this series, you definitely want to get in on this installment. Too much is revealed and questions raised with new information that reading Torched (book 13) may leave you a bit disoriented. You don’t want to miss all Heat has in store!