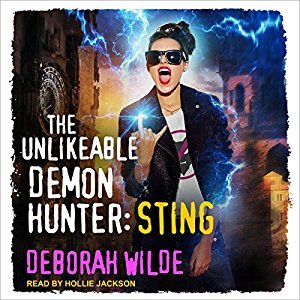 After a bumpy start as the only female demon hunter in the top secret Brotherhood of David, Nava Katz heads to Prague for her first undercover mission: unmasking a demon movie star. She’d be all kinds of thrilled if it weren’t for the fact that her fellow hunter-with-benefits, Rohan Mitra, has reclaimed his rock star status and assigned Nava the role of groupie.

Rejecting her “be a good girl and follow orders” directive, Nava unleashes an alter ego guaranteed to hook their celebrity target and drive Rohan crazy. No downside–until she finds herself up against Rohan’s past, the Brotherhood’s antiquated thinking, and her own identity issues, turning her personal life into the bomb that could blow up the entire operation.

Sparkly and deadly; it’s a plan.

Nava Katz is still on the hunt for a way to get her brother inducted into the Brotherhood. It is a coincidence that her first undercover mission puts her in Praque, where according to Rabbi Abrams, the key to Ari’s induction is located.

One of Nava’s partners on her mission to expose a famous movie star is her babysitter Rohan. Rohan for this mission has to go back to his roots as a rock star. This is not the person Nava knows and a lot of trouble is revealed. This is where I got frustrated and had problems. I know this is UF and not meant to be led by a romance. However, the back and forth Rohan plays between all the females drives me crazy. Is he acting or does he truly have feelings for Nava. Or is it Lily. Or is it Poppy. This is probably how rock stardom really is, but the lack of link to one person was just as confusing to me as it was to Nava. Possibly purposely for the story and if so, it was certainly accomplished. I was left kind of frustrated and irritated with Rohan throughout most of the book.

The plan the boys come up with has Nava playing this role of in the background groupie. There is no way that role will work for Nava. I liked seeing her take control and come up with her own plan. Her plan is much more successful than the guys. She knows how a guy’s mind works and she is able to line their suspect up to just where they need him.

The action was pretty good and I was also on the edge of my seat waiting to see if Nava was going to get caught. I would like to see her take care of herself a little more. The ending held a surprise that just set me teeth on edge. I already spent the whole book trying to figure out Rohan and Nava’s relationship, but this final scene just left everything back up in the air again after we pretty much had the whole situation figured out.

There was a scene of body switching and that left me totally confused. I think it totally had the narrator as mixed up as I was. I’m glad it didn’t last long.

I did connect a little more with Nava in this book. I was so happy to see her assert herself. More questions are raised and leave the ending with a lot of paths we could go in upcoming books. The frustration I felt over the whole romantic and rock star situations was just so annoying that I was really tired of being bounced around. I have to focus on the other aspects of these stories so I don’t get so caught up in the mess of a romance storyline. I think the start of an overall arc with the Brotherhood gives us something to connect all the stories.

I wonder how my frustration level with Nava and Rohan will continue into book 3. I hope it is more in the background and not something that is going to be an ongoing, in your face conflict. On to find out!