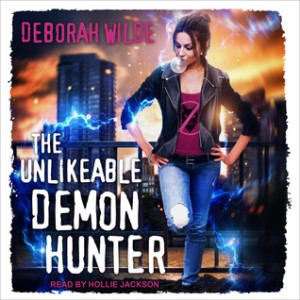 Can a foul-mouthed, romance-impaired heroine with no edit button and a predilection for hot sex face her worst nightmare … a purpose?

When Nava half-drunkenly interrupts her twin’s induction ceremony into the Brotherhood of David, she expects to be chastised. What she doesn't expect is to take her brother's place among the previously all-male demon hunters.

How does a smart-ass, self-cultivated hot mess even fight demons? Especially demons who are doubly motivated; bonus points for killing the first female hunter.

Now she’s on a mission to test her mettle, but her Brotherhood-appointed babysitter is distractingly hot. When you combine charisma and hard abs, how’s a girl to focus and what will it cost her in the end?

Odds of hooking up with a smoking hot rock star before she bites it: much better.

The Unlikeable Demon Hunter by Deborah Wilde is the first in the Nava Katz series. The reviews I’ve seen have been varied, but the covers and blurbs have made it sound just too fun to pass up.

Nava Katz is a young woman determined to have the best time all the time. This story is set in Canada so you have the younger drinking age, and boy does Nava take advantage. She is out to party and have her one and done’s. Her character rubbed me the wrong way for a bit. Nava was just a bit too immature and party girl for what I was expecting. After an induction ceremony gone wrong, Nava’s life makes a complete turn and not one she’s happy about. She is bound and determined to find a remedy for it and make things go back to the way they were.

It was an interesting journey as the stage is set for the Brotherhood and the part Nava is to play. I think the world was well set up while at the same time we are treated to some action. The monsters are a kind of learn as you go for the most part. At least some of the ones that Nava encounters. But we are learning as Nava is so it lays out well in the story.

The Unlikeable Demon Hunter was a fun read, with just a bit too much immaturity for me. Definitely too much adultness for a younger reader, though. I think the immaturity was supposed to be funny most of the time, and while other times it just felt like too much. I didn’t really connect with Nava. I’m going to continue to listen and hopefully the characters will grow on me.

The audio was ok. There were a lot of accents and I know that must have been hard for Hollie Jackson. I wasn’t thrilled with the male character’s voices, but they were distinguishable in most cases so it worked out. Also, I found listening much more enjoyable at 1.2 speed. The narration was a bit slow, but sounded just right when I sped it up a notch.