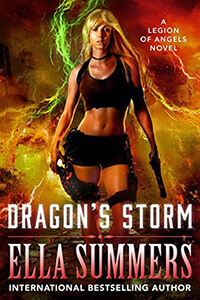 The supernatural storm of the century is coming.

Leda’s quest to gain the magic she needs to save her brother leads her to the castle of the Dragons, home of four soldiers in the Legion of Angels with extraordinary powers over the elements. If she makes it through their training, she might just survive her next sip of the gods’ Nectar and level up her magic.

But the gods’ gifts of magic come at a price. Leda can already feel the Nectar changing her, making her less human—and so is her budding romance with the angel Nero. Sip by sip, kiss by kiss, the change is taking hold of her.

As if that’s not enough, Leda finds herself once again caught between the armies of heaven and hell—and tempted by a darkness that threatens to consume the Earth.

Dragon’s Storm is the fourth book in the Legion of Angels series.

Dragon’s Storm is, I believe a level 4 magic that the members of the Legion are training to pass at Storm Castle. It is the ability to control the elements and there are four dragons representing the elements. The competition between Jace and Leda is especially noticeable in this situation as each of the trainees are allowed a mentor, and Jace’s just happens to be his big sister who is just as hard ass as her father. While they train, everything seems so hopeless and you wonder if they are ever going to gain the needed abilities to pass the promotion ceremony, but when push comes to shove, the abilities are there. At least that seems to be the case with Leda.

Despite a falling out, Nero seeks out Leda to help him on a mission to find one of the storm dragons who has gone missing. They think she may have gone to the dark side, but need to find her to be sure. The tension between the two and the indecision Leda is dealing with started to grate on me, but the action the two get into breaks it up enough that you tend to forget the romantic parts until we break into a scene. Leda and Nero fight well together and are a great match. We just need the First Angel to see that as a benefit.

We learn more about Nero’s mother and Leda’s brother Zane, who she’s been searching for. It is a surprise! Definitely something new to be investigated in upcoming books!

This series packs both the action and the romance I love to read in my Urban Fantasy books. They straddle that border between PNR and UF just nicely and I feel satisfied on both fronts when I listen. I’m so excited for the next books to find out how relationships continue in the Legion with the shake up it takes during Dragon’s Storm!

I’ve been burning through these audios like crazy. As fast as I can get my hands on them. Cris Dukehart does not disappoint in this series at all. I feel like she really has a grasp on Leda and her personality, as well as the conflicted, stoic soldier of Nero. Her narration of the books totally immerses me in the story and has me hanging on her every word.

The Legion of Angels Series