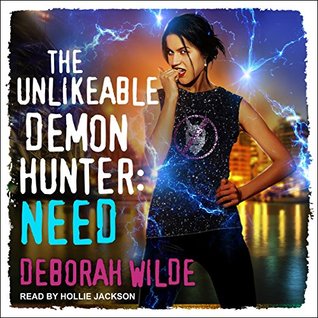 Nava Katz has a lot on her plate:

Nava is hot on the heels of a demonic serial killer and finally working with her brother. The assignment should be a dream come true, not a nightmarish power struggle made worse by her twin's refusal to believe there's corruption within the Brotherhood.

She's determined to find proof of their dirty dealings, even as she risks irrefutably breaking her sibling bond.

And speaking of clocking annoying males upside the head...

Nava is also totally over smoking hot rock star and fellow hunter Rohan Mitra. There is a veritable buffet of boy options out there, and this girl is now all-you-can-eat.

So when her demon hunt brings her first love, Cole, back into her life, her revenge fantasies for closure-on all fronts-are a go.

Except neither her old wounds nor her new ones are as healed as she believes. It’s Less Hopelessly Devoted, more Worse Things I Could Dok.

In this 3rd edition of the Unlikeable Demon Hunter, we see Nava finally get a case with her brother. However, it’s not the partnership that Nava would like. Now that Ari has his powers, he has this superiority complex that is causing issues between the twins. He is totally taking over the case. It is rubbing Nava the wrong way, but she also has a lot of other stuff on her plate, like exposing the Brotherhood and her crazy love life.

Need felt like a total mish mash of different story lines. There is the case of the serial murders, which Nava does work some on. That investigation leads to a meet up with ex-boyfriend Cole. This could be Nava’s opportunity to get Rohan out of her head. I am still frustrated by Nava’s whole love live scenario. The back and forth in the relationships just highlighted how immature that Nava still is. I find this really annoying and have to focus more on the action and investigations.

The demon hunting seemed to lead to the serial killer pretty quickly, or so we think. There is a surprise twist that seems to come out of nowhere. It was distracting moving between the two investigations, knowing which one Nava was working on. It helped that Rohan was the one helping her with the Brotherhood investigation, which she seemed to do more of because of her brother’s controlling attitude.

The Unlikeable Demon Hunter: Need was a quick listen that had me frustrated in many areas. Mainly with the characters and their decisions. The story itself took many twists and turns and had a very interesting ending. I’m hoping as the series goes on, we see the characters fit into their roles a bit better and not be so flighty and indecisive. I’m left with the feeling that it may be the case.

The narration by Hollie Jackson was done well. However, I still had to listen with the speed a little bit higher as her narration seemed to be a bit slow. At 1.25 it was perfect. Her accents for the hunters are well done. I’m not crazy about Rohan’s voice, but I’ve become used to that being him, so I’ve adjusted.