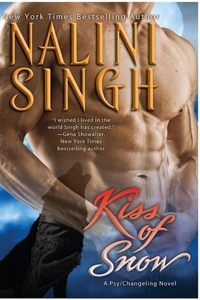 Since the moment of her defection from the PsyNet and into the SnowDancer wolf pack, Sienna Lauren has had one weakness. Hawke. Alpha and dangerous, he compels her to madness.

Hawke is used to walking alone, having lost the woman who would've been his mate long ago. But Sienna fascinates the primal heart of him, even as he tells himself she is far too young to handle the wild fury of the wolf.

Then Sienna changes the rules-and suddenly, there is no more distance, only the most intimate of battles between two people who were never meant to meet. Yet as they strip away each other's secrets in a storm of raw emotion, they must also ready themselves for a far more vicious fight...

A deadly enemy is out to destroy SnowDancer, striking at everything they hold dear, but it is Sienna's darkest secret that may yet savage the pack that is her home-and the alpha who is its heartbeat.

I will admit. I was unsure going into Kiss of Snow. There was plenty of foreshadowing into this couple, but in my mind, Sienna was still a kid. It was unclear for me how Nalini was going to get around that issue with Sienna and Hawke. He obviously had issues with it. He actually had a few issues. But Sienna was now of an age that there should be no taboo between her and Hawke having a relationship. It was still a hurdle I faced with the story, especially since his interest in her had been so long running in the series.

Hawke’s insistence that he had lost his mate when he was young and was not meant to have another got frustrating at times. They were kids. How could they have been absolutely sure they were meant to be mates? His internal fight between these issues made for one irritable alpha. I still think it is cute how he deals with Sasha and Nadia, though. He is determined to drive Lucas mad.

Sienna’s powers are something she is trying to deal with on her own. She is getting some help from Sascha, but even Sascha doesn’t know the extent of Sienna’s powers. Sienna is afraid of what she is able to do, and how it will affect her pack mates. She practices rigid control so that she doesn’t go full force. Relieving power pressure in pieces.

One of my favorite parts is Sienna going out to the club with some of the younger wolves and cats. Short skirt, tall boots dancing on the bar until Hawke arrives. His reaction really made me laugh. This was near the beginning of it all, so his reaction was one that drove him crazy.

The action in Kiss of Snow was like a nuclear blast. Our evil councilor comes out with an attack on the wolves with his specially trained army. Hawke must take control and save as many of his wolves as possible. He secrets away the young and mothers so they will not get caught up. Still the fighting gets really intense. Hawke and Sienna are pushed to a place that neither may be able to live with afterwards. It was explosive!