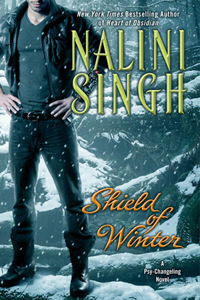 Assassin. Soldier. Arrow. That is who Vasic is, who he will always be. His soul drenched in blood, his conscience heavy with the weight of all he’s done, he exists in the shadows, far from the hope his people can almost touch—if only they do not first drown in the murderous insanity of a lethal contagion. To stop the wave of death, Vasic must complete the simplest and most difficult mission of his life.

For if the Psy race is to survive, the empaths must wake…

Having rebuilt her life after medical “treatment” that violated her mind and sought to stifle her abilities, Ivy should have run from the black-clad Arrow with eyes of winter frost. But Ivy Jane has never done what she should. Now, she'll fight for her people, and for this Arrow who stands as her living shield, yet believes he is beyond redemption. But as the world turns to screaming crimson, even Ivy’s fierce will may not be enough to save Vasic from the cold darkness…

Now that I’ve listened to Shield of Winter, I can’t say Heart of Obsidian is my favorite anymore. It is too close of a tie!

Vasic is a character we have seen off and on throughout the series. He has been the cold, Arrow. He takes his orders from Aden who now seems to be siding up with Krychek. Vasic doesn’t believe he has long to live, so he has no fear. Arrows don’t really have fear, but Vasic has been colder than the rest. But now that he’s found this woman, he is looking at his diagnosis a little differently.

Ivy Jane is a spit fire. She falls for Vasic and is determined to draw him out. She knows with someone as hard trained as an Arrow is not going to be easy. However, there may be something happening between the Arrows and the Empaths. This phenomenon helps Ivy Jane to get through to a different side of Vasic. She is a determined character and is not going to give up now that she’s found her mate.

The world around Ivy Jane and Vasic is falling to pieces with attacks on major cities. The only help that can be offered for the people are the skills of the E-Psy. The problem is that this designation has just been brought to light and have not had the training they need for such large scale attacks. Ivy Jane and her friends must push themselves to use skills they’ve been hiding all their lives to save the people of their race from destroying the world around them. The E-Psy have all been assigned an Arrow as they try to overcome this attack. Working together may be the only way to save the cities.

I loved Ivy Jane and Vasic’s story. Vasic’s whole change throughout the book just grabbed me. I think with all that has been going on, even the Arrows were already losing their silence. To see Vasic as an example to the rest of the Arrows was amazing. I fell in love with Vasic and I couldn’t get enough. Ivy Jane and her persistence and patience with him were what he needed to survive his mental stability coming apart.

The action in the world was crazy exciting. The disease that was overcoming the world was so powerful I didn’t know how they were going to contain it with such weak E-Psy. Every time there was a break out, I was glued to the book scared to death of who may get caught up in the wave.

I don’t know how I would choose between these later books in the series. They have gotten better and better. The characters are going through changes on their own, not just because they meet their mates. Everyone is feeling safe enough to come out of hiding and the stories are now showing how each of the main characters is evolving. It is truly great and I’m loving every minute of it!