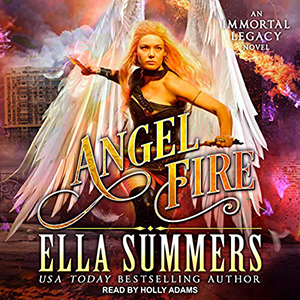 Cadence Lightbringer, daughter of an archangel, has trained from birth to one day drink the Nectar of the gods and ascend to the angels’ ranks. She’s always been the perfect soldier. She’s always known exactly where her life is headed.

Until she is assigned to a mission with Damiel Dragonsire, Master Interrogator of the Legion of Angels.

Powerful, paranoid, and brutally intelligent, Damiel has built up a reputation for hunting down each and every traitor hiding within the Legion’s ranks. And his latest suspect is Cadence. Convinced she is not the perfect soldier everyone believes her to be, he will stop at nothing to expose her.

Angel Fire is the first book in the Immortal Legacy series.

I have to admit here. I was a tad confused. Immortal Legacy has a different narrator than the Legion of Angels series, so I didn’t recognize the names at first. It took me a little bit to realize that this series is actually the prequel to the Legion of Angels. This is actually the story of Nero’s parents and how they come to be together and rise the ranks that they did. I was a little on the fence with Angel Fire. A few of the characters for Legion of Angels are in this series and it is kind of weird seeing them earlier than the parts they play in LOA. I did however enjoy the book. We see how formidable Damiel is but how Cadence starts putting little cracks in his armor. She has a secret to hide, he knows there is something up. Damiel is a master interrogator and he believes he will get to the bottom of all that Cadence is. However, he is pulled in two different directions. The drive to reveal all of Cadence’s secrets, and the need to have her with him and work as a team.

Like the Legion of Angels stories, we get a good action plot where Damiel and Cadence must come together to save the world. I really enjoy those threads as they mix with the blooming romance. Damiel’s Master Interrogator skills are put on display and he is really concerned with how Cadence will handle them.

I really enjoyed Angel Fire, I was just a little disappointed that we were moving backwards instead of forward. The narration was good, it just wasn’t Cris Dukehart and after binging Legion of Angels, I had become adjusted to her narrating the characters I already knew. It will probably take me to the next book to get totally accustomed to Holly Adams.

Angel Fire definitely was a fun story, and I will definitely be continuing the series.