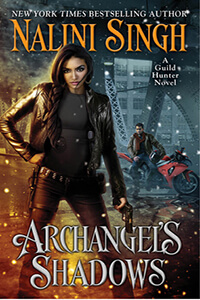 In the wake of a brutal war, the archangel Raphael and his hunter consort, Elena, are dealing with the treacherously shifting tides of archangelic politics and the people of a battered but not broken city. The last thing their city needs is more death, especially a death that bears the eerie signature of an insane enemy archangel who cannot— should not—be walking the streets.

This hunt must be undertaken with stealth and without alerting their people. It must be handled by those who can become shadows themselves…

Ash is a gifted tracker and a woman cursed with the ability to sense the secrets of anyone she touches. But there’s one man she knows all too well without a single instant of skin contact: Janvier, the dangerously sexy Cajun vampire who has fascinated and infuriated her for years. Now, as they track down a merciless killer, their cat-and-mouse game of flirtation and provocation has turned into a profound one of the heart. And this time, it is Ash’s secret, dark and terrible, that threatens to destroy them both.

I have always loved Ashwini. She has been one of my favorite female characters throughout the series so far. I think I need to read some of the novellas, because I have a feeling there may be some shorts in there with her and Janvier. I also don’t know if her powers have been mentioned before.

Ashwini is a kick ass Guild Hunter who spent many a job chasing down the sexy, cocky Janvier. She has always complained but underneath that there has always been the attraction lurking under the surface. It has become a game with the two. Now though, they are working together to try and keep more death and destruction from happening in their city.

Janvier has picked Ashwini. She is his and will always be his, but he is playing it slow. Letting the game play out until they can go “full throttle” after he discovers some secrets that Ash is holding. I really loved the way the two interacted with each other. They are a great working pair. Janvier knows Ash is perfectly capable of doing her job and he doesn’t stand in her way.

A couple of really strange deaths have been happening in the city. The Tower needs to keep them quiet as they don’t want to start up any more panic while they are recovering from the destruction that just happened. Ash & Janvier are perfect for getting the job done quickly and quietly. Some of the evil I kind of had an idea who had a hand in it, but there were also some surprises. I love how Ashwini takes care of business. She may be human but she has some great skills when handling the vamps.

Our mystery gets solved just in time for Elena’s block party. Just another reason for a great celebration. The city really needed the pick-me-up. With Elena as the Consort, the Tower is getting looked at in a different way by the citizens. Elena has brought a little humanity into it, without making it look weak. The perfect balance for running the city.

I can’t stop without mentioning Naasir. He has to be my favorite character ever. Everyone expects surprises from him and he doesn’t act according to what “normal” should be. He can be a bit scary, but you have to know how to handle him. I absolutely loved the dinner party scene.

This is one of my favorite books of the series. I was worried that I was not going to get the ending I wanted. When the book ended and I got the “Epilogue” I was sure I was going to be disappointed. I guess things just work out the way Nalini needs them to work out for future stories…

I have to say I was not really thrilled with Janvier’s voice in the narration. It didn’t seem to portray the masculinity I envisioned him with. Illiam’s accent sometimes sounds funny and inconsistent to me. Other than that I have no complaints about the narration at all.