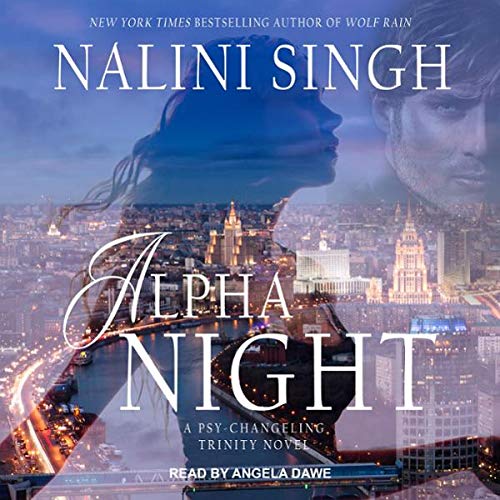 Alpha wolf Selenka Durev’s devotion to her pack is equaled only by her anger at anyone who would harm those under her care. That currently includes the empaths who’ve flowed into her city for a symposium that is a security nightmare, a powder keg just waiting for a match.

Ethan Night is an Arrow who isn’t an Arrow. Numb and disengaged from the world, he’s loyal only to himself. Assigned as part of the security force at a world-first symposium, he carries a dark agenda tied to the power-hungry and murderous Consortium. Then violence erupts and Ethan finds himself crashing into the heart and soul of an alpha wolf.

Mating at first sight is a myth, a fairytale. Yet Selenka’s wolf is resolute: Ethan Night, broken Arrow and a man capable of obsessive devotion, is the mate it has chosen. Even if the mating bond is full of static and not quite as it should be. Because Selenka’s new mate has a terrible secret, his mind surging with a power that is a creature of madness and death…

I was so excited that we were back in Russia. Close to the bears is where I like to be! We are focused on the wolves, but we do get glimpses! Valentin is so much fun and his sloth of bears are always getting into trouble, which is a reason Selenka tries to keep her wolves away from them. But despite the bit of rivalry they put on, I think they are really good friends.

Selenka is a very strong alpha leader of her pack. I was surprised by how quickly her wolf picked Ethan Night as her mate. He seemed so sneaky. As an Arrow, I expected him to be completely devoted to his team and protecting the E’s. But he had a bit of a hidden agenda at first that kind of soured my impression of him. Ethan believes he has a condition that will drive him to kill and has made Aiden swear to kill him before he totally loses it. It kind of reminded me of rogue wolves. I don’t think that was a good enough reason for him to align with the Contractor.

With Ethan’s protection of the E’s at their symposium, where he was actually supposed to be doing something entirely different, he puts a snag in the Contractor’s plans. It is making this person reevaluate the path they are taking and probably putting together a plan B. I shouldn’t have been as surprised as I was by the Contractor. We definitely learn a lot about this person’s goals and the plans that will affect everyone.

I enjoyed the romantic relationship between Selenka and Ethan. I felt like they both lowered walls to be able to come together. Selenka is still pretty bossy, but Ethan is very accepting that in their relationship, he is never going to be the alpha. He wants to support his queen.

I loved Alpha Night with it’s conspiracy, romance and daily trials Selenka must deal with with her wolves. I can’t wait to see what our next Psy-Changeling Trinity is going to hold for us!