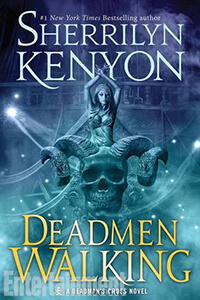 To catch evil, it takes evil. Enter Devyl Bane―an ancient dark warlord returned to the human realm as one of the most notorious pirates in the New World. A man of many secrets, Bane makes a pact with Thorn―an immortal charged with securing the worst creations the ancient gods ever released into our world. Those powers have been imprisoned for eons behind enchanted gates . . . gates that are beginning to buckle. At Thorn’s behest, Bane takes command of a crew of Deadmen and, together, they are humanity’s last hope to restore the gates and return the damned to their hell realms.

But things are never so simple. And one of Bane’s biggest problems is the ship they sail upon. For the Sea Witch isn’t just a vessel, she’s also a woman born of an ancient people he wronged and who in turn wronged him during a centuries long war between their two races―a woman who is also sister to their primary target. Now Marcelina, the Sea Witch, must choose. Either she remains loyal to her evil sister and almost extinct race against Bane and his cause, and watches humanity fall, or she puts faith in an enemy who has already betrayed her. Her people over the totality of humanity―let’s hope Bane can sway her favor.

I had been procrastinating on reading this series, despite my love of all things related to the Dark Hunter world. While I love the lore and world, this spin off is historical and about pirates. Not a combo that jumped out at me and made me want to snatch up the book. What did make me grab the books was the covers. They are beautiful and look great on my shelf. When I saw the series up for audio review, I decided I would give it a try. I think I have only listened to maybe half a book of a narration by Holter Graham and I wanted to listen to a whole story by him. I had heard great things about his narration. Therefore, I snatched up Deadmen Walking and Death Doesn’t Bargain for review.

As usual, I struggle with the first book in a series. I had an especially hard time settling in with the accents and some of the verbiage. When you read some of the stranger words, you kind of make up your own pronunciation, so it was strange hearing them out loud, especially with an accent.

In Deadmen Walking, we learn about Devyl Bane, who is known by many other names, which was a bit confusing at first until you start to recognize them. He is the leader of this group of Dead Men who Thorn has unleashed to make sure the most powerful creatures stay secured behind their gates and keep the world safe. In Deadmen Walking we learn a lot about Devyl including his past and present situation with an evil ex-wife and her sister, also known as the Sea Witch ship. I thought that Marcelina was a woman, but also the boat itself was kind of interesting.

Once we get settled with the character introductions and the world has been somewhat established, the real battles begin. Vine seems to be the main concern for this book. She releases some creatures and eventually finds her way out of her prison to take revenge on Bane. The battle is brutal and one thing that always worries me and drives me nuts happens twice in this book. The ultimate sacrifice for someone that makes it seem like the story is going to end for a couple. I always get worked up and freaked wondering just HOW I’m going to get an HEA out of that situation. In Deadmen Walking, I felt like that only halfway worked out for me, as there is one sacrifice that is left open. Thankfully, I know it will be addressed in Death Doesn’t Bargain, but it left the ending of this book a bit up in the air for me. By the end of Deadmen Walking, I was getting quite attached to these characters.

The romance seemed to resolve fairly quickly, considering these two had been together for centuries. However, we did need it to so we could get on with the dangers and action the Deadmen were required to address. The action was great and got the adrenaline pumping as we tried to keep track of what was happening to who. It was fast paced and made you want to keep your ears alert to make sure none of our Deadmen got hurt. It definitely made the story enjoyable and I’m anxious to learn more about this world. There are a lot of characters, and I struggled to keep up with who was who, but I think as we work our way into the series, I’ll become more familiar with each of them and their powers.

Holter Graham’s narration was well done. I’m not the biggest fan of his female voices, but he does well with the pirate accent even though at times it was a little fast for me to understand all that was being said. By the end of the book my ears were adjusting to the accent and pace so I’m sure I’ll be more familiar in Death Doesn’t Bargain.

I’m definitely glad I picked up Deadmean Walking and that I chose audio as my format. I’ve been able to get immersed despite my reservations on historical and pirates.