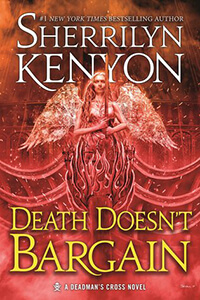 Death Doesn’t Bargain is the second historical fantasy title in New York Times bestselling author Sherrilyn Kenyon’s Deadman’s Cross series. Where Deadmen tell their tales, and every soul is damned or redeemed by the final choices they make.

The Deadmen are back...

But so are the demons who have broken free of their eternal prison and are bent on mankind's destruction. The worst of the lot is Vine, determined to claim their lives for taking hers. She will see the world burn...and has the perfect lure to destroy them all. One of their own.

Kalder Dupree has never known a day of mercy. Born to the cruelest of mer-races, he sacrificed himself for his crew and is in Vine's hands. He expects no mercy or rescue.

Yet Cameron Jack is determined to set Kalder free. As a Hellchaser, it's her calling, and she cannot allow even a not-so-innocent to be tortured for an act of kindness that spared her damnation.

To defeat evil, it sometimes takes an even worse evil, and Cameron is willing to do whatever she must to make this right. If Vine thought she had her hands full before, she hasn't seen anything nearly as powerful as Cameron's resolve.

Death Doesn’t Bargain ends not long after Deadmen Walking. In the beginning the crew is trying to find a way to save Kalder from what happened to him in that first book. That was one of the things from book one that bothered me. I hated his fate in that book. He chose it and I knew then that something was brewing between him and Cameron Jack. I knew the Captain and Cameron would not let Kalder down and they would do something to rescue him.

One thing that is not lacking in Death Doesn’t Bargain is action. The crew gets hit constantly from different forces. They end up in Kalder’s old home and a lot of interesting things are revealed to Kalder and the crew while there. His magic is a lot stronger than I originally thought and he was able to do a lot to greatly help out his crew during the tough times.

I loved the scenes with Thorn, Savitar and Acheron together. They had such great banter and it was funny to see the resentment between Thorn and Savitar. They were like little kids with their name calling and petty remarks.

The romance was sweet. Cameron was innocent, but she is very determined to have what she wants, despite knowing that it cannot be forever. That she cannot have her Kalder and the life she has planned out. I really enjoyed her drive and will to jump into the middle of the fray. She does her fair share of saving lives, and I think is greatly suited to this motley crew.

Death Doesn’t Bargain was exciting and thrilling and I truly enjoyed the story. Holter Graham kept the pace with the sweet times as well as the exciting fast-paced times. His voice has become a pleasure to listen to and I feel like I’ve really latched on to the accents. Holter does such great accents, it is as if I am truly in that time period, struggling to understand the locals! This book I had a much easier time of it with the accents as I had become accustomed to how the characters spoke. It made it much easier to enjoy the book.

Death Doesn’t Bargain was a lot of fun and like I have found so many times in the past, I am glad I progressed beyond book one. This series just gets better and I cannot wait for the third book, At Death’s Door coming up on May 15, 2019!