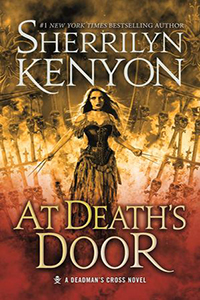 #1 New York Times bestseller Sherrilyn Kenyon brings us the final chapter in the Deadman's Cross saga with At Death's Door, an epic pirate fantasy perfect for her millions of Dark-Hunter fans.Welcome to the latest Deadmen's Quest...Valynda Moore was born cursed. So when she dies as the result of a spell gone wrong and is trapped in the body of a voodoo doll, she expects nothing else from her messed up life. Until Thorn, leader of the Hellchasers, offers her a chance at redemption and a new life.But nothing has ever gone her way, for the Malachai, the very beast she and her crew of Deadmen have sworn to keep locked away, has risen. And this time he's taken prisoners. Valynda must keep her wits about her or be denied her salvation and forced to watch as the entire world falls into the hands of absolute evil.It's a demon-eat-demon world where the stakes have never been higher and either redemption or the ultimate betrayal waits for her At Death's Door.

This review kills me to write, and I’ve put it off for some time. I am a huge fan of Sherrilyn Kenyon and for one of her books to just totally fall short for me was devastating. I was really looking forward to this conclusion to the Deadman’s Cross series.

The biggest thing that sticks out for me about this book is how many times we have long, unnecessary diatribes about the suffering the two main characters have endured. How everyone in their life has done them wrong and terrorized them their whole lives. Hearing the character’s back story makes sense. But having it take up most of the book was just too much. It took up time that we could have been having adventures and new stuff happening. I found myself shaking my head every time we rehashed Valynda’s and Xuri’s stories.

Also, after following the author on social media, I felt like some of her real life experiences were being brought into this story. It was interesting to hear how the situations were handled by the characters.

There was some good action scenes, and the Malachai is an ever present danger, gathering his troops to take on the world, but I just felt there was so much “poor me” from the main characters, that it swallowed up all the short bursts of action we did get.

I do enjoy seeing Acheron and Thorn in the early days. We even get a bit of Simi which is always fun. The story leads us to New Orleans so we get to see New Orleans start up as the main site for the Dark Hunters.

It hurts me to say there was little I enjoyed in At Death’s Door. It was a story that I debated giving up on many times. This is just my opinion and you could very well have a different one after reading. I’d really like to hear what you liked or did not like about this story.