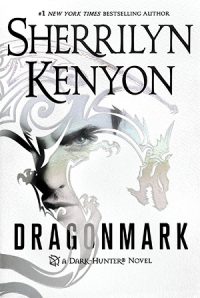 Centuries ago, Illarion was betrayed– a dragon made human against his will, then forced to serve humanity as a dragonmount in their army, and to fight for them in barbaric wars, even while he hated everything about them. Enslaved and separated from everyone he knew and from his own dragon brothers, he was forced into exile in a fey realm where he lost the only thing he ever really loved.

Now he has a chance to regain what’s been lost— to have the one thing he covets most. But only if he gives up his brothers and forsakes the oaths he holds most dear. Yet what terrifies him most isn’t the cost his happiness might incur, it’s the fact that there is just enough human in his dragon’s heart that he might actually be willing to pay it and betray everything and everyone– to see the entire world burn...

In Dragonmark, we are actually taking the perspective of Illarion, a brother who made his appearance in Dragonbane. We do go back to Illarion’s past and visit some of the events that have impacted and shaped this ornery dragon brother. I found the story of the romance between Illarion and his mate Edilyn kind of disappointing in the beginning. Edilyn’s fate, as well as what he endures for hundreds of years make Illarion a very unhappy camper.

Even when Illarion is released from his imprisonment, his mental state is not the best. However, he will help out his brothers. This is where we get pulled back into Dragonbane. The situations all replay themselves. Some even coming from Maxis’s point of view. That surprised me. I wasn’t all that excited to be repeating a story I had already read, but it would have been a little more tolerable if the story had of been straight from Illarion’s point of view.

Much of the book I did find myself flipping through as it was all so much of a repeat. Sometimes, however, a refresher is good for me. That is what keeps me from raging too loudly about so much of the book being a repeat. I am disappointed that I spent so much money on this book for the amount of new story I got.

Things do progress past what I believe Dragonbane did, and we are stuck in the same illusion Illarion is in. Or what Max and everyone believes is an illusion. Even I believed it was an illusion after how Illarion was left alone. It was also a bit disappointing to this romance lover that we didn’t get back to Edilyn and Illarion until 30 pages before the end of the book.

I really did enjoy the story of Illarion and Edilyn when it was about the two of them. That ended up being about half the book. The refresher was ok, I could skip through it, but I don’t think it was worth the money I spent. Especially considering I bought a hard cover to keep with my collection. I’m hoping that our next book, Dragonsworn, takes us farther into the dragon story with some new story.