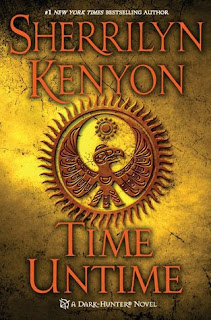 The Mayans aren’t the only ones with a 2012 prophecy…

Long before recorded history, there was a Keetoowah warrior so feared that everyone trembled before his wrath. Only a brutal betrayal by the one closest to him could defeat him. But not even death was the end of a man so strong.

Kateri Avani has been plagued her entire life with dreams she doesn’t understand. Images of places she’s never been and of a man she’s never seen. Her quest for answers has driven her to Las Vegas where she hopes to finally silence the demons in her mind.

What she never anticipates is coming face to face with the warrior who has haunted her her entire life. One who belongs to a world the scientist in her refuses to believe is real.

Ren Waya came back from the dead to keep the prophecy he began from coming true and ending the world. For thousands of years, he has fought the same evil that once possessed him. But now that evil has found the one person he can’t fight. The one person who, against his will, holds the most sacred part of him.

His heart.
But if he doesn’t kill Kateri, the deadliest of evils will reemerge and destroy everyone else on the planet. It was a sacrifice he made once.

Will he be able to make it again?

I think that Time Untime is more of a “Dark Hunter Universe” book than it is a complete Dark Hunter book.  Yes, the main character is a Dark Hunter, but his world revolves more around fighting the evil from his pre-Dark Hunter civilization than the Daimons.  The book was alot like a series beginner than the 17th of a series.  The whole world and situation had to be laid out for us as a lot of the history is unrelated to the previous books.  I will admit, this was a hard thing for me.  With the other Dark Hunter books, I could relate to the gods like Artemis, Apollo, Zeus and the others.  But the history here involved more the Native American and Mayan beliefs and I am unfamiliar with those and the names were kind of hard for me to pronounce so I would have to keep reading them over and over to try and wrap my head around them.  I would really like to know if the beliefs in this book are actual beliefs from those nations.  It makes me want to pick up some history books and do some studying.  I actually was looking at my sons high school history syllabus wanting to take the class for him.  It was US History this year, but they are doing the old west and that just reminds me of Sundown!  Is it crazy of me to want to take high school courses so I can better relate to fictional characters?  There is just so much to read and learn!

Back to Time Untime.  I was really surprised at the relationship between Kateri and one of our previous characters.  It was a pleasant surprise as it guaranteed a visit from one of my favorite Dark Hunters.  I won’t say who though because I don’t want to spoil the surprise of who Kateri really is.  I was going to say another “one” of my favorite Dark Hunters makes an appearance, but that would be wrong, I think in total there are 3 that we see that I’ve formed an attachment to.  One of them though, is definitely Sundown.  He cracks me up every time he speaks.  That is another awesome point about all of the Dark Hunters.  They may have endured incredible pain and hardship, but they come back with some witty comments and attitudes (after they find their women that is).  One of my favorite quotes:

“Sure.  Why not?  If everyone dies, I’d have to cook my own food, and I cook like shit.  How about you?”  Ren laughed.  “Only fry bread and okra, and I make no claims to the edible state of either.”

I think I like that one because I can’t cook either!

I really liked Time Untime, but I think it was more because of the supporting characters than the story itself.  I think if I knew more about the background culture and legends, it might have been easier for me.  This may be a spoiler but it will explain one of my drawbacks to Ren.  So stop here before I say this.  I did not like Ren’s age.  It puts him on a level with another character and I think that it took a bit away from that person.

So, I’m going to give Time Untime a 4 heart rating.  It would have been 5, and may even be a 5 for others, but I took too long to pick up the legends so it made it kind of a hard read for me.  Now onto the year-long wait for Styxx, releasing August 6, 2013.  Man, I hate waiting a whole year for a book.

Get your copy of Time Untime by Sherrilyn Kenyon here:

Oh and let me drop a link to Sundown’s book.  Just gotta have everyone learn about one of my favorite characters!