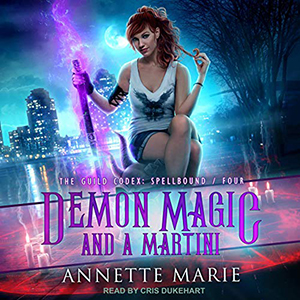 When I first landed a bartending job at the local guild, I didn't know a thing about magic. These days, I'm practically an expert on the different magical classes, but there's one nobody ever talks about: Demonica.

Turns out they have a good reason for that.

My guild is strictly hellion-free, but some people will risk life and soul to control the biggest bullies on the mythic playground. And now a demon has been loosed in the city.

My three best friends are determined to slay it, but even badass combat mages are critically out-magicked. And that's not all. The monster they're tracking--it's not hiding. It's not fleeing. It's not leaving a trail of corpses everywhere it goes.

The demon is hunting too. And in a city full of mythics, it's searching for deadlier prey.

If we can't unravel the demon's sinister motivations, more innocent people will die, but finding the answers means digging into dark secrets ... and learning truths I never wanted to know.

--
Note: The three mages are definitely sexy, but this series isn't a reverse harem. It's 100% fun, sassy, fast-paced urban fantasy.


This post contains affiliate links you can use to purchase the book. If you buy the book using that link, I will receive a small commission from the sale that goes towards keeping the blog running.

Tori is settling into being a Guild member despite constantly avoiding any training her 3 mages might be trying to give her. She’s even somehow gotten wrangled into planning the Guild’s Halloween party! Everything was going along great until a demon warning goes out that has all Guilds canvassing the streets trying to find an unbound demon.

As usual, despite originally being delegated to keeping combat mythics fed and hydrated, Tori ends up out in the field with Aaron, Kai and Ezra. There are secrets being kept that Tori doesn’t know if she wants to know. I felt like as the story went on, she finally grows enough to realize that she is strong enough to deal with the secrets. But are they going to be able to keep the secrets from the rest of the mythic world?

The friends end up in a race to protect one of them and end up in a fight for their lives with the most difficult to kill beings. Tori shows that she is smart enough to do what she needs to to protect those she cares about. I really loved seeing her realize things about herself and grow into a person that can be trusted by her friends. The adventure dealing with the demons was fun, and you were always left wondering just what the friends would be able to do against them.

I love Cris Dukehart’s narration. She has Tori down pat and I love the attitude and personalities she gives everyone. Definitely a fun listen and I’m excited to see what Tori and the boys get into next!