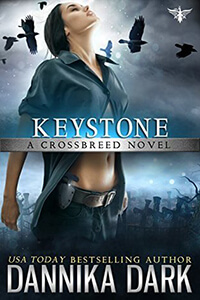 Raven Black hunts evildoers for fun, but her vigilante justice isn’t the only reason she’s hiding from the law. Half Vampire, half Mage, she’s spent years living as a rogue to stay alive. When a Russian Shifter offers her a job in his covert organization hunting outlaws, dignity and a respectable career are finally within her grasp. The catch? Her new partner is Christian Poe - a smug, handsome Vampire whom she’d rather stake than go on a stakeout with.

They're hot on the trail of a human killer who will stop at nothing to get what he wants. One misstep during her probationary period could jeopardize Raven’s chance at redemption, and her partner would love nothing more than to see her fail. Will Raven find the courage to succeed, or will she give in to her dark nature?

Dark secrets, unexpected twists, and a blurred line between good and evil will keep you on the edge of your seat.

The Crossbreed series follows Raven, a cross breed of Mage and Vampire. Her eyes betray her as cross breed so she spends her days hiding out in Cognito, killing the bad guys she finds. She has some powers that are unique and they help her be able to kill. The problem is she takes on the dark light of the those she kills and spends days recouperating getting rid of the dark light. She earns herself the name of the Shadow.

Since this is a spin off from the Mageri, we don’t go into a lot of world building, but we do spend a lot of time getting to know Raven. I really enjoy her character. She basically lives off the streets with nowhere to go when she is found by a benefactor and offered a probationary position on a team doing work the Higher Authority needs an outside team for. This works out great for Raven as it gives her a place to stay and the ability to continue to do the work she does. However, she’s worked too long on her own and finds herself on the outs with the group called Keystone. That doesn’t stop her from trying to solve the case on her own, save her would-have-been partner and protect those she loves.

I loved this book. I didn’t have book one syndrome with it as I already knew the world and Raven was a character I liked right away. She is tough and mouthy. Just an awesome heroine. Even better was having Christian Poe as a main character. Not only does Raven and her mouth make me laugh, but put her and Christian together I was laughing out loud throughout the book. There is a good amount of action and sexual tension that keeps the adrenaline going pretty consistently.

Nicole Poole once again NAILS the narration of this book. Her voices for the characters stuck out and made them memorable. You knew who was who. She also hits the sarcasm and wit that the characters have, which I think makes the scenes even funnier, or even more thrilling. I’m definitely looking forward to more from this series!