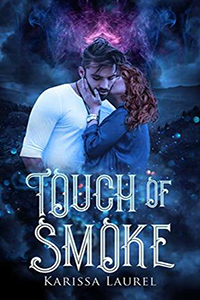 Three years ago, Rikki Albemarle watched her best friend die at the hands of a supernatural evil. Certain she was slated to be the next victim, Rikki fled her small Smoky Mountain hometown, vowing to never come back. Plagued by nightmares and knowing she's the only one who believes Mina's death was no accident, Rikki returns with hopes of finding answers and holding the killer accountable.

Rikki is convinced the key to unlocking the secret of Mina's death lies with Owen Amir, the alluring young army vet who once claimed her heart. But the deeper Rikki digs into Owen's past, the more she's torn between the urgings of her heart and her memories of him on the night Mina died.

After falling further into the rabbit hole, Rikki lands at the feet of an ancient and powerful evil determined to finish what it started years before. To survive, she'll have to make a decision: believe Owen is the monster she always feared he might be or trust him enough to stay and fight for a second chance at love.

Touch of Smoke by Karissa Laurel had me totally torn in two. This is why it is a 2.5 read for me. I decided to give it a middle of the road rating to signify my torn feelings. I want to start out with the things I liked.

Touch of Smoke held my curiousity throughout the book. It was written from Rikki’s POV but alternated between the past and then three years later when she has come to confront her demons. I needed to know just what the issues were that sent Rikki away and I couldn’t put the book down, dying to know just what happened.

I loved Owen Amir. He was so in love with Rikki and he showed it in every way possible. He followed her lead in the relationship despite how desperately he wanted her acceptance and love in return. Luke and Mina were also great characters. I loved their relationship as well as their loyalty to their friends.

The surprise that pulls Rikki back into the world of the supernatural totally blew me away. I thought that particular character had a different purpose so when the truth came out, it was totally unexpected.

The back and forth between the past and present frustrated me. We would just get to the good stuff from the past that may answer questions, then you were taken back to the present where Rikki was trying to come to terms and straighten out in her head what happened. So the whole time I was reading the present scenes, I was just wishing we’d get back to the scenes from the past. It made it hard to understand just what Rikki’s problem was.

I also felt frustration with Rikki’s character. Her trust issues and the way she ran so hot and cold with Owen annoyed me. In a way, once I finished the book, I could understand that her issues made the relationship deeper and more meaningful. That made the incident even more heartbreaking for Rikki. But I still had a hard time forgiving her for her lack of faith in Owen to explain what she didn’t understand about that day.

My only other complaint was the ending. It had an HEA, I will say that. But it was not the HEA I wanted. If magic is going to be involved, there should have been some magic available that could have made this ending a little more satisfying for me.

As a whole, the story was a good one. The paranormal aspects were interesting and the story itself was written in a way that kept me reading to find out the whole tale. You are fed just enough pieces of the puzzle to keep you engaged. I’m sure the couple of things that bothered me are small enough that it shouldn’t keep others from enjoying the book. I did enjoy it, I just felt a lot of frustration but yet couldn’t seem to tear myself away either. That is what makes this book so hard to rate. It did evoke a lot of emotion for me, so that I felt strongly about things that happened, but not all those emotions were good.

Just because Touch of Smoke was a tough read for me, doesn’t mean it is something you may not enjoy. I’d recommend it, especially if the few things that bothered me are not something that would bother you. 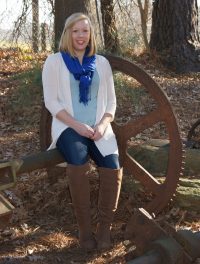 Karissa lives in North Carolina with her kid, her husband, the occasional in-law, and a very hairy husky named Bonnie. Some of her favorite things are coffee, dark chocolate, super heroes and Star Wars. She can quote Princess Bride verbatim. In the summer she’s camping, kayaking, and boating at the lake, and in the winter, she’s curled up with a good book.