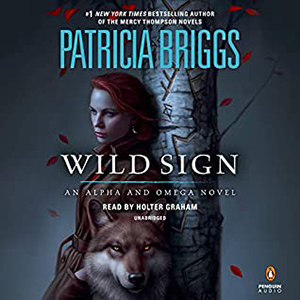 In the wilds of the Northern California mountains, all the inhabitants of a small town have gone missing. It's as if the people picked up and left everything they owned behind. Fearing something supernatural might be going on, the FBI taps a source they've consulted in the past: the werewolves Charles Cornick and Anna Latham. But Charles and Anna soon find a deserted town is the least of the mysteries they face.

Death sings in the forest, and when it calls, Charles and Anna must answer. Something has awakened in the heart of the California mountains, something old and dangerous — and it has met werewolves before.

I will admit, I’m more of a Mercy fan, but I do still love Charles and Anna. In Wild Sign, they find themselves in California trying to solve a mystery of disappearing people that have been living on the Marrok’s land. There is a lot of mystical happenings that prove this is not just an instance of a group of people deciding to move on.

The magical being in this story has powers that surprised me when the Charles and Anna are taken by surprise. I was scared for what was going to happen to Anna a few times. She is strong, but this being can do some crazy things. My heart was breaking for Charles on more than one occasion and I just wanted to cry. You can’t say that very often about the strong, scary pack enforcer.

The audio was great as I’ve come to expect from Holter Graham. I was pulled into Anna and Charles story and my heart stopped more than a few times. This was one of my favorite of the Charles and Anna books. Also, I did pick up the hard cover because who doesn’t want that amazing artwork on their bookshelf? I can’t wait for more!