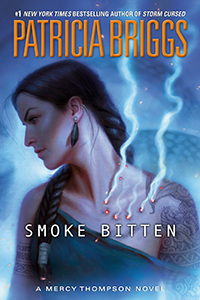 Mercy Thompson, car mechanic and shapeshifter, faces a threat unlike any other in this thrilling entry in the #1 New York Times bestselling series.

I am Mercedes Athena Thompson Hauptman.
My only “superpowers” are that I turn into a thirty-five pound coyote and fix Volkswagens. But I have friends in odd places and a pack of werewolves at my back. It looks like I’m going to need them.

Centuries ago, the fae dwelt in Underhill–until she locked her doors against them. They left behind their great castles and troves of magical artifacts. They abandoned their prisoners and their pets. Without the fae to mind them, those creatures who remained behind roamed freely through Underhill wreaking havoc. Only the deadliest survived.

Now one of those prisoners has escaped. It can look like anyone, any creature it chooses. But if it bites you, it controls you. It lives for chaos and destruction. It can make you do anything–even kill the person you love the most. Now it is here, in the Tri-Cities. In my territory.

Not if I have anything to say about it.

First off, how can you not write a review about a Patricia Briggs book without mentioning the cover? It is SO pretty. Definitely one for the shelves.

Now, I have to say, my overwhelming feeling for this book is, WTF Adam! I had this idea of Mercy and Adam’s relationship. It was a strong, unbreakable bond. They just seemed perfect to me. But Adam went and broke my bubble of illusion. His actions and attitude really had me fuming most of the book. Those feelings pretty much overrode all other feelings for the book.

Mercy’s powers seemed to keep expanding and honestly, I don’t know what new trick she’s going to pull out of her pocket. I also have to admit, I’ve lost track of all the powers she has gained. It would probably be good for me to go back and do a refresher.

This newest threat to the Tri-Cities is just plain scary. It could be anyone, at anytime. You don’t know if the person standing across from you is truly that person, or a monster ready to take your life. This story thread was exciting and had me scratching my head on just how Mercy was going to solve this problem. It was a real puzzle to solve. So many things had to come together to form a narrow window that Mercy had to trap the threat. I really enjoyed working through this with everyone, despite the stuff with Adam that really annoyed me.

I love Lorelei King, and despite her narrating multiple series I read, she manages to keep each series separate in my head. I definitely recommend this series in audio.