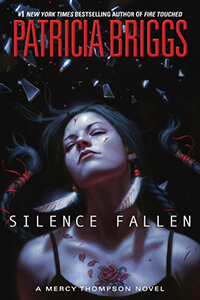 In the #1 New York Times bestselling Mercy Thompson novels, the coyote shapeshifter has found her voice in the werewolf pack. But when Mercy's bond with the pack and her mate is broken, she'll learn what it truly means to be alone...

Attacked and abducted in her home territory, Mercy finds herself in the clutches of the most powerful vampire in the world, taken as a weapon to use against alpha werewolf Adam and the ruler of the Tri-Cities vampires. In coyote form, Mercy escapes only to find herself without money, without clothing, and alone in the heart of Europe...

Unable to contact Adam and the rest of the pack, Mercy has allies to find and enemies to fight, and she needs to figure out which is which. Ancient powers stir, and Mercy must be her agile best to avoid causing a war between vampires and werewolves, and between werewolves and werewolves. And in the heart of the ancient city of Prague, old ghosts rise...

Mercy is back! This series is such a fun urban fantasy series. We’ve seen Mercy grow from single, independent car mechanic, to the mate of the Tri-Cities Wolf pack. She’s fought and clawed her way through many fae, vampires and werewolves to achieve this new status as one of the strongest people in the area. Needless to say, she is a majorly tough heroine.

The timeline and points of view varied and overlapped a bit. I found it took me some time to get used to. Being overseas, out of everyone’s element was really interesting. We were able to see special places through Mercy’s eyes as she travels across Europe. Taking everyone out of their element definitely put more unknowns in place that kept the story full of new information right from the beginning.

Mercy’s time was mostly spent trying to stay free and cope with her ghostly skills in a town so very old and full of dead. But it wouldn’t be a Mercy Thompson novel if she wasn’t thrown into many different positions that she has to find her way out of. Albeit, we were missing quite a bit of fae action in Silence Fallen, the amount of vampire and werewolf antics were enough to keep Mercy more than busy. She just needed to meet up with Adam. She just had to get back what they lost and it would have gone a lot easier.

Adam’s fight starts right from the beginning when Mercy is taken. He must fight his wolf from the very beginning. Luckily his pack helps him to keep his head together and even deal with the characters that are to be included in retrieving Mercy. They have to pull together a specific mixture of participants, and we even end up with a big surprise. If I hadn’t been discussing this book with a friend, I wouldn’t have clued in that a character was involved a lot earlier than I even thought. My oversight of the clues worked well for me so that I was surprised at the end with everyone else.

I found I was more interested in Adam’s POV of the story most. There seemed to be more action and sly planning going on in his life. I was doing a lot more guessing and tensely waiting to see what was going to happen to everyone. That is not to say I wasn’t into the goings on that Mercy was dealing with. I have to be careful reading her parts as I tend to forget what powers she has and always need refreshers.

Just like you always get with a Mercy Thompson book, there is so much action and excitement that it’s hard to put down. Dying to know what was going to happen next kept me flipping pages and totally engrossed. Silence Fallen was another great installment to the series and I think will lead to some interesting storylines when they get back home.