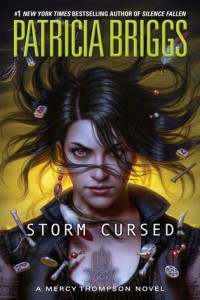 In this new installment in the No. 1 New York Times bestselling series, Mercy Thompson must face a deadly enemy to defend all she loves . . .

My name is Mercedes Athena Thompson Hauptman, and I am a car mechanic.

And a coyote shapeshifter . . . And the mate of the Alpha of the Columbia Basin werewolf pack.

Even so, none of that would have gotten me into trouble if, a few months ago, I hadn't stood upon a bridge and taken responsibility for the safety of the citizens who lived in our territory. It seemed like the thing to do at the time. It should have only involved hunting down killer goblins, zombie goats, and an occasional troll. Instead, our home was viewed as neutral ground, a place where humans would feel safe to come and treat with the fae.

The reality is that nothing and no one is safe. As generals and politicians face off with the Gray Lords of the fae, a storm is coming and her name is Death.

But we are pack, and we have given our word. We will die to keep it.

Book 11 in the Mercy Thompson series, Storm Cursed by Patricia Briggs has Mercy dealing with the political issues that have fallen to her after her declaration at the bridge.

The Fae and politicians are arranging a meeting and the politicians have found a way to wrangle Adam and Hauptman Security into providing security for them during the talks. As an intermediate, Mercy has been nominated to make acceptable arrangements for the meeting. However, this is just a small portion of what Mercy needs to do to protect her territory.

Some black witches have arrived in town and a lot of deaths have turned up. Zombies are being created and must be dealt with. Even cute little mini goat zombies! It appears that these black witches are possibly connected to the big meeting, but it seems they were more there to take over territory.

I didn’t really feel much of a connection between the witches and the meeting, despite some of their actions. I saw the big intentions of the witches as taking over the territory. Especially getting rid of the current resident witches. Storm Cursed showed us how the witches gain power and even gives a surprise that devastates Adam.

Storm Cursed was a fast paced adventure with a lot of action in a short period of time. Coyote does make an appearance and helps out with some clues for Mercy. We do see some loss that affects some of our wolves. I had a hard time putting Storm Cursed down as there was hardly a pause in the adventure. Mercy moves from one problem to the next trying to save her territory from these black witches and the zombies they are making. This was a really enjoyable installment to the Mercy Thompson series. So many ups and downs. I do think that Bran had a hand in preventing some problems due to his sending a witch tortured wolf to live with Adam’s pack. I think he foresaw the issue that the pack was going to face with the witches and this was his way of contributing without being obvious about it.

I was definitely pleased with this installment and am also totally blown away by the cover! I love the cover art that Patricia Briggs has for her books. She has a very talented artist! This is another series I buy the hard covers for just to have those beautiful covers on my shelves!

Don’t miss this installment, even if you were frustrated with the previous book. I’m sure people will be happy with Mercy and the relationships in Storm Cursed!