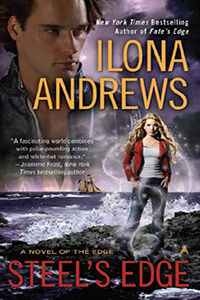 The Edge lies between worlds, on the border between the Broken, where people shop at Wal-Mart and magic is a fairy tale—and the Weird, where blueblood aristocrats rule, changelings roam, and the strength of your magic can change your destiny…

Charlotte de Ney is as noble as they come, a blueblood straight out of the Weird. But even though she possesses rare magical healing abilities, her life has brought her nothing but pain. After her marriage crumbles, she flees to the Edge to build a new home for herself. Until Richard Mar is brought to her for treatment, and Charlotte’s life is turned upside down once again.

Richard is a swordsman without peer, future head of his large and rambunctious Edger clan—and he’s on a clandestine quest to wipe out slavers trafficking humans in the Weird. So when his presence leads his very dangerous enemies to Charlotte, she vows to help Richard destroy them. The slavers’ operation, however, goes deeper than Richard knows, and even working together, Charlotte and Richard may not survive...

Steel’s Edge seems to be the final book in The Edge series by Ilona Andrews. This book features Charlotte and Richard.

Charlotte is living in the Edge after she gets devastating news that her husband will not stand for. He divorces her and Charlotte feels she needs to just get away so she moves into the Edge where she meets Rose’s grandmother. She takes Charlotte in and quickly befriends her. They all live quietly until one day a man in terrible shape ends up on her lawn in need of major healing, which is Charlotte’s magical skill. Rose’s grandmother recognizes the man and they get him into Charlotte’s house to begin treatment.

What the women do not know is that Richard is running from Slavers. Slavers will do anything to catch their prey, and they do. Only Charlotte and Tulip survive. Charlotte is determined to get revenge and goes after the Slavers. She kills using her skills, which put her in a bad place if anyone found out she used her powers to harm. But she rescues Richard and the two embark on an adventure to bring down the Slaver ring.

I really enjoyed seeing the side of Richard that is presented in Steel’s Edge. In the previous books he seemed emotionless to me. That may have been his demeanor and Charlotte is breaking through it. Charlotte is fighting with the guilt of using her magic for hurting people, but they run into times that it just can’t be helped and she is concerned about what will happen to her if she gets sucked into the evil side of her magic and can’t get out. Richard does what he can to keep her from having to use her magic as they deal with these Slavers.

One thing I really enjoyed is having the boys, George and Jack involved in the adventure. They are still just teenagers, but their skills prove that they are definite assets. They bicker and go on like brothers do, but they know how to help out Richard and Charlotte.

The characters that Ilona Andrews writes are so unique and special. I love the way the romance is weaved into the action. Richard’s issues with Charlotte’s part of the plan left me giggling. He acted in ways that I just didn’t expect him too. He is devoted to Charlotte and it is hard for him not to show it.

I was truly concerned with Charlotte’s state at the end, and even though I knew how Richard felt about her I was still concerned with how he would deal with their new reality. I definitely felt satisfied at the end though. I’m a little concerned that this is the last book in the series. I feel like the final fight scene in the book was missing a person. Unless I missed that part, someone that should be gone was not mentioned. I don’t know his state. Whether he got away or Charlotte got him. If I missed that would someone drop me a note and let me know what happened to him. That character’s life would leave a thread open. Open threads worry me. On one hand, there is always the option of the Andrews coming up with a new book at a later date, but on the other hand we have to deal with the fact that it is the end of this world.

The narration is wonderful, as always with Renee Raudman. There were a few points that I wondered if I was in Charlotte’s or Richard’s head, but for the most part, I knew who was who just by the accent.

I definitely recommend the Edge series and definitely in audio. The Andrews and Renee Raudman work so well together that you can’t keep from getting wrapped up in the story. This was a wonderful addition to the series and I am completely content with how Charlotte and Richard’s story ended.