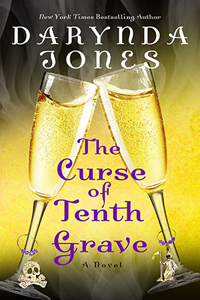 As a Part-time PI and fulltime grim reaper, Charley Davidson has asked a lot of questions throughout her life: Why can I see dead people? Who is the hot supernatural entity following me? How do I get gum out of my sister’s hair before she wakes up? But, “How do I trap not one malevolent god, but three?” was never among them. Until now. And since those gods are on earth to kill her daughter, she has little choice but to track them down, trap them, and cast them from this dimension.

There’s just one problem. One of the three stole her heart a very long time ago. Can the Razer, a god of absolute death and destruction, change his omniscient spots, or will his allegiances lie with his brothers?

Those are just a few of the questions Charley must answer, and quick. Add to that a homeless girl running for her life, an innocent man who’s been charged with murder, and a pendant made from god glass that has the entire supernatural world in an uproar, and Charley has her hands full. If she can manage to take care of the whole world-destroying-gods thing, we’re saved. If not, well…

Charley and the gang have all arrived home and this story takes place about a week later. Charley learned a lot at the end of Ninth Grave. Those secrets bring doubt in her relationship with Reyes. She is watching him closely to see if he is really aware of the things she learned. Reyes has his own issues that keep him from truly embracing their relationship. Cookie comes up with a really fun way to break the ice a little and get the couple at least talking. Not truly sharing all their secrets, but coming to an agreement about them. I feel like we have taken a step back in time where Charley and Reyes began their relationship. Kind of on fast forward, but we still have the whole dancing around each other to finally reach the end goal of them as a couple.

I think Charley is the multi-tasker of the world. Not only can she continue her work as a PI, but she can deal with the personal demons plaguing her and Reyes. She is able to tie up her cases pretty quickly despite her tail. Charley seemed to be back into the swing of things confident and focused. If you can imagine Charley being focused.

By the time we reach the main plot of Charley’s place on this dimension, she’s willing to risk everything. Even use her friends to deal with the gods that are stalking Beep. She has a trick up her sleeve and after being taught how to use her skill of slipping into another dimension, she has the abilities she needs to act. When she finds the god she is looking for, she is in for a surprise. The surprise brings out Reyes’ power like nothing before.

Like I always find with this series, the pace of the story near the end is hard and fast. You need to really slow down and absorb the details of what is going on and the information Charley is gathering. The problem with that is by that time, you are so into the story that you can’t slow down. I get totally engrossed and can’t read fast enough.

I’m so happy that we are back home in this Curse of Tenth Grave. We got a got start on this new gods story line in Ninth grave. Charley has a strong purpose. Secrets do get revealed that will give us a peak into what we will face in the future. We also get a little peak at the purpose of their fight. I will admit there may have been a few tears at the end.

Waiting for Eleventh Grave in the Moonlight is going to be a struggle. This world is so absorbing that when I got to the end, I kept swiping the kindle in hopes that I’d get a peak at what’s to come. I just didn’t want to stop. The Curse of Tenth Grave had me totally engrossed. Definitely top of my list for the year!