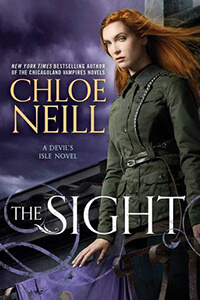 The paranormal war that engulfed New Orleans seven years ago is over. But the battle for the city is just beginning . . .

Claire Connolly is a Sensitive, infected with magic when the Veil that divides humanity from the world beyond fell. Magic can easily consume and destroy a Sensitive, and if Claire’s secret is discovered she’ll be locked into the walled district of Devil’s Isle along with every other Paranormal left in the city.

Bounty hunter Liam Quinn discovered Claire’s secret, but refused to turn her in. Together they saved New Orleans from the resurgence of magic that nearly destroyed it. But now a dangerous cult is on the rise, and it will take both Claire and Liam—and magical allies within Devil’s Isle’s towering walls—to defeat the occult threat before magic corrupts them both...

I was a little late getting to The Sight after I read The Veil, so my memory of what happened in book one was somewhat blank. It didn’t take too long though and I had the characters all back in my head and knew the world. This is the world where magic has attacked the world and all the paranormals have been gathered up and are kept in a place called Devil’s Isle, in New Orleans. Claire Connolly is a Sensitive, meaning magic affects her. She has to keep her magic hidden so that Containment (the law enforcement) do not pick her up and put her in Devil’s Isle before she turns into a wraith, which is what happens if a Sensitive does not learn to contain their magic.

Claire runs Royal Mercantile when she is not out helping friend, potential boyfriend with bounties. Liam hunts wraiths and delivers them to Devil’s Isle. There relationship is kind of in an infant stage where Liam is scared that Claire will lose control of her magic and he’ll have to be the one to bring her in to the Isle and he doesn’t want to do that.

In The Sight, a rebellion group has risen and is determined to take out all paranormals and those that don’t kill them, like Containment. Ezekiel was really off the rails going after the law enforcement too. He has gathered a mass of followers who are ready to give their life to cleanse the earth of paranormals and their supporters. Well, not really supporters, but those that put up with the paranormals without killing them. Claire and her friends work with Containment and those at Devil’s Isle to try and protect New Orleans from being totally destroyed by Reveille.

Claire is really close with her friends and I love the group they make. They also have Delta which is lending as much help as they can. The side characters all have such earnest and devoted personalities. They all come together to fight and watch each other’s backs. I really loved Tadji, although she tries to stay out of the fight, she is finding herself in merchandising and really enjoying it. It was fun to see her ideas for the store, especially once Claire worked out her ambivalence towards Tadji’s help.

I love action, and I love romance, so I was completely sucked into The Sight where we move from one to the other without too much downtime for me to lose interest. I am a big Liam fan and I am ready for them to become a couple. Malachi sort of acts like he’s got some interest there, but I think he’s just more interested in what Claire can do than in her romantically.

We do come down to a final battle where Reveille has come to destroy Devil’s Isle and all within it. There are some powerful moments as Containment and Paranormals come together to defend their lives. I am hoping that the peace established is something that will carry on with those still living after the attack and Reveille is eradicated.

The Sight kept me reading longer than my bedtime most nights, as the action and conflict doesn’t give you much time for a breather. I have been in a bit of a reading slump and I feel like I came out of it a bit with this book. There was so much excitement and budding romance, I had trouble putting the book down. The ending left my blood boiling a bit, and I sure hope that these things get resolved in The Hunt. You can believe I will be tearing through it looking to satisfy my need for things to be ok.

This is quite a bit different from The Chicagoland Vampires which stemmed my love for Chloe Neill, so this series took me a little longer to settle into, but I’ve found the groove and am really enjoying Devil’s Isle.