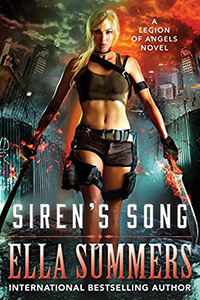 Leda Pierce’s latest mission brings her back to her hometown at the edge of the Frontier. But things have taken a turn for the worse in the six months since she left home to join the Legion of Angels in New York City. Crime lords now rule over the town, and the beasts’ numbers are exploding just beyond the great magic wall that separates humanity from the plains of monsters.

Together with the fiercely seductive angel Nero, Leda guides a group of pilgrims across the monster-infested expanse to the ruins of the final battle between gods and demons. What begins as a pilgrimage, however, soon turns into a treasure hunt for an ancient weapon that could tip the balance of power between heaven and hell—and spirals into an intrigue that pits Leda and Nero against a rogue member of the Legion, a legendary angel as powerful as he is black-hearted.

Siren’s Song starts not long after Witch’s Cauldron. Leda has been leveled up and now has the power of the Siren’s Song. With the Siren’s Song power, Legion members can compel others to do the things they want. We start out at a bar with Leda practicing her powers with Jace until things go wrong. As usual, Nero appears to fix the problem. He seems to be close by a lot. I think he’s pretty much onto Leda’s troublesome ways.

The Legion is working hard to power up as many of it’s members as possible. Nix, the First Angel hasn’t given away why, but it is an important goal and everyone is working hard. Now they are sent on a mission that takes them to Leda’s hometown. Here she gets a taste of what being a Legion member really means. One of the rules is you cannot interfere in anything BUT Legion business. So when Leda comes across a woman in her town being attacked, her instincts overrule her head. She comes very close to getting both her and Nero into some very big trouble. I think this is the start of where we see Leda finally realizing that she cannot just be herself anymore. She’s an agent of the Legion and that changes people. It’s gotten her labeled as a troublemaker and a bad influence on Nero. As such, we find ourselves with some big changes in the New York office, and this mission. Changes that are not going to be in Leda’s best interest. A new character also surfaces at the end that is a big surprise. He’s tough, Legion trained, but he does seem to have a sense of humor about him that makes me think I’m going to enjoy his character in the upcoming books.

I love the action and the development of Leda and Nero’s relationship. In Siren’s Song, the romance is a little more on the “on” side, without a lot of disruption or tension between the two. They are taking it extremely slow, probably mostly because of their responsibilities. Leda’s power grows exponentially during this book, so we see her really get this new power down solid. Unfortunately that doesn’t help her during a level up ceremony.

Siren’s Song is full of action that will keep you riveted to the book wondering what could possibly happen to these characters next. We get to know more of the agents and their personalities which was a lot of fun. There are some characters on their team for sure. I would have loved to see Leda and Nero move a little farther along, as the wait for them to finally become a “couple” is driving me crazy. It is slow going for sure. Not that it’s their fault though.

Cris Dukehart does an amazing job as always with the books in this series. I love the way she gets Leda’s urgency in situations and the cockiness of the other soldiers. I find myself engrossed in the story as she tells it and don’t have any times where I find that she’s off pace or fumbling with a character’s voice. Siren’s Song was a great listen!

The Legion of Angels Series