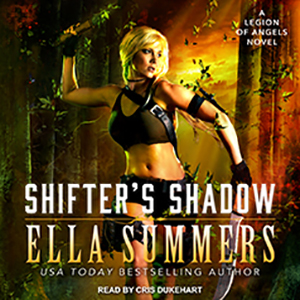 “So this was just one gigantic, cosmic war between light and dark magic. And we were only a small part of it, a tiny dot in the gods’ empire. It was no wonder that they saw us as insignificant.”

Tested by the gods, Leda and her angelic mate Nero venture into the City of Ashes, a fallen fortress in the Western Wilderness where nightmarish monsters reign supreme and an ancient secret is buried. To survive the Gods’ Trials, they will have to save the city—and they will have to do it without their magic.

Their victory, however, comes at a heavy price. And the secret they uncover will upset the balance of power between Earth and heaven.

So. Let me tell ya. When I saw this book was finally coming out in audio, I nearly came out of my skin! I’ve seen others reviewing the ebook copies and I was so jealous. But I was determined that I was going to wait for the audio because I just loved it so much.

In all that time, I really did miss Leda and Nero. With their relationship pretty much set, the trials that come at them now will test that relationship as well as risk their lives. I was absolutely furious when I found out the true meaning behind Nero’s advancement trial!

This pair works amazing together and I couldn’t stand to see them separated. The Gods and other Angels work their hardest to drive a wedge there though. Plus we have these beings that are endangering the city, but are they really as evil as they seem? What is happening to all the magic users in the city? And will it affect the legion members? Surprising relationships are revealed.

I will admit, there were times I felt a little in the dark. It has been so long since I read book 4, that some of the characters slipped my mind, and a big player in Shifter’s Shadow was one of them. I really struggled to bring up what I could remember of him.

Shifter’s Shadow was full of action and adventure. It was a non-stop ride and I was breathless and relieved by the end. I am so happy I was able to wait for the audio because it was as good as I expected it to be from Cris Dukehart!