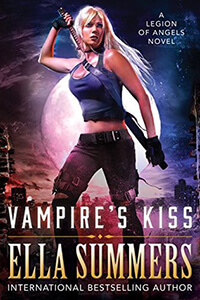 Once you sip the Nectar of the gods, there’s no going back.

Leda Pierce is working as a paranormal bounty hunter on the Frontier, the dividing line between human civilization and the plains of monsters. Life is simple and the pay modest, but at least she has her family. That is, until a vampire hunt goes wrong and her brother goes missing, captured by the dark angels of hell.

With no magical powers of her own and no way to find him, Leda’s only option is to go to New York and join the Legion of Angels, an elite unit of supernatural soldiers with powers gifted to them by the gods themselves. If she can survive long enough to make it up the ranks, she will gain the magic she needs to find her brother.

But Leda soon finds herself on the wrong side of a conspiracy that will shake up the supernatural world—and at the mercy of a fiercely powerful and tempting angel.

In Vampire’s Kiss, the first in the Legion of Angel’s series, we meet Leda. She is a bounty hunter in this world where humans are restrained within walls to keep the monsters out. That doesn’t include vampires and angels as they live behind the walls too. A great war between the demons and angels has separated the world. Some humans have been granted powers to try and help defeat the monsters.

The Legion of Angel’s is like an elite law enforcement agency. However, the further up the ranks you get, the more powers the angels bestow on you. Leda needs certain powers to help her brother and decides joining the Legion of Angel’s to get a certain power is the only way to save him. The training is grueling and it doesn’t help that one of their coaches seems to have it out for Leda.

I will warn you, as it aggravated me, there is a bit of a love triangle in this book. There are two men who seem to have taken an interest in Leda and they both approach her in different ways. I thought that a choice would be obvious at one point, but Leda makes some decisions that lead the other choice on a bit and I thought that was wrong. She should have seen what was happening. I think this is where I figured this may be classified as a New Adult. She’s young and naive enough to not see the plays in front of her.

Despite the love triangle bit, I found Leda to be a tough, kick ass character. She has the loyalty and love of her foster family in their bounty hunting business. She puts herself through a lot to try and save her brother. Training in the Legion of Angel’s is beyond difficult but Leda is determined and I liked that about her character. Their training takes them on an actual case and proves to them what they are in for as part of the force. The investigation and the story’s whodunit, kept me captivated and interested in the book.

The narration for Vampire’s Kiss was nicely done. The feelings of the characters come across nicely to help us feel included in the story. I’m a Cris Dukehart fan to begin with so this book was a no-brainer pick for me.

Besides the love triangle there was one other thing that kind of disappointed me. This book just ends. No warning that you’re nearing the end, nothing. It was more like an ending to a chapter. I was upset by it, but it has made me even more anxious to get to the next book in the series. I really think that Urban Fantasy readers will enjoy this book. The balance of action and romance was pretty consistent with the genre. This is definitely a book I could recommend!